Learnings from the mid-West

Written by  Ian Williams is a Pioneer forage specialist 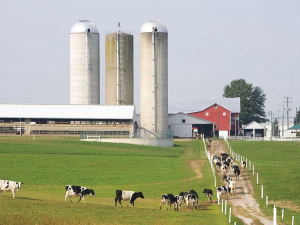 After travelling around the USA's mid-West, Pioneer forage specialist Ian Williams has five pieces of advice for NZ dairy farmers.

IIn June last year, I had the privilege of travelling through the mid-West, USA with a group of NZ dairy farmers.

We visited several leading dairy farmers and scientists in Wisconsin, Iowa and Illinois. As we travelled and talked to these people, it became clear that some of the principles behind business success in the US are similar to those we have here. There were 5 things that were frequently mentioned and are directly applicable to the NZ context.

Grow and harvest as much home grown feed as you can

When we asked dairy farmers, “What was the key to their business success?”, we got the same answer…” Keep feed costs down by growing as much of your feed needs as you can”.

They then added “Source what you can’t grow at home as cheaply as possible”.

This is the same here in New Zealand. Several analyses run over the last 15 years have shown that optimising home grown feed is closely linked to optimizing profit.

In New Zealand, as a result of pasture production plateauing in many regions, farmers are using maize silage to increase the total amount of dry matter grown.

The farmers we visited stressed the importance of optimising feed quality. In their case, this meant keeping their maize plant growing and laying down starch until the point of harvest. It also meant making sure their other crops (e.g. lucerne) are harvested at the right time.

Feed quality is critical to US milk production. The higher the feed quality, the more food cows can eat. The more food they eat, the more milk they produce. The same principles apply here.

Feeding your cows the best quality pasture you can, will ensure the optimization of milk production. Unfortunately, given NZ’s climate variation, farmers often struggle to have enough high-quality pasture when they need it to maintain milk production. Having maize silage, a high quality, stored forage, on hand makes sense for times when pasture is not enough because there isn’t enough pasture.

Many US dairy farmers have struggled to make money for the 3 previous seasons. In Wisconsin last year, 2 farms per day simply gave up dairying. The farms we visited survived this downturn by keeping their cows producing milk efficiently and by keeping control of core costs. Once again, home grown feed (maize and lucerne silage) was critical to making sure costs stayed under control.

Limit the impact of capital cost

There is often criticism of the US system as being capital intensive. While cows are housed in expensive barns, the land around the barn, which the farm uses for growing feed, is relatively inexpensive (about 1/3 to ½ the value of NZ land).

This is the opposite to the NZ system where our infrastructure is relatively cheap but our land is expensive.

When we compared return on capital (ROC) between the NZ and the US farms, the farms we visited had a similar ROC to that of our farms.

US farmers were very aware of not letting the cost of capital reduce their ability to drive cash from their farms. As in the case here, this was done by diluting their capital cost over more milk.

Look after the cows

Nearly all the barns we visited were clean and quiet with animals in excellent condition. There were no obvious signs of animal distress. Time and time again we were told by the farmers, “Look after the cows and they will look after you”.

A US farmer has been awarded US$265m (NZ$411m) in a lawsuit against herbicide providers Bayer and BASF.

America's biggest milk producer, Dean Foods, has filed for bankruptcy and is planning to sell assets.