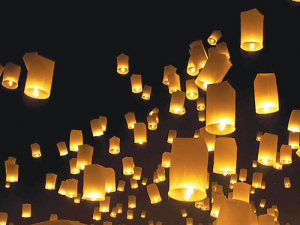 A debate over sky lanterns is heating up in the UK.

UK farmers want a ban on a popular Chinese festival where ‘sky lanterns’ are released.

Farmers concerns over the possible effects of the lanterns on their livestock and land has led to the Maidstone and Kent Shine Up Festival being suspended.

The National Farmers Union says it’s talking to local councils and encourages them to ban the use of sky lanterns wherever possible to protect the welfare of livestock and farmers’ land.

NFU chief land management adviser Sam Durham says sky lanterns pose a serious risk to livestock and it is pressuring councils to ban the lanterns so that farmers can do their work without unnecessary worry.

“It’s not just farm animals that can be affected,” says Durham. “Sky lanterns can cause fires in crops, grassland on moors and stacked bales of hay and straw, which could lead to a loss of buildings.

“Some councils have banned sky lanterns and we encourage more to do so. The public and farmers can write to their local councils spelling out how dangerous sky lanterns can be.

“The festivals’ use of biodegradable lanterns made of bamboo is still not enough to minimise the risk.

“Bamboo is still a hardy and sharp material that can pose risk to livestock.”

Shine Up Festival has announced four new dates for the lantern-releasing festival to be held in September. On its website it says lanterns are 100% biodegradable and eco-friendly, made from rice paper, bamboo and string.

“They have been specially designed for large scale public events and comply with the UK industry code of practice,” it says.

Shine Up is a “leave no trace event”.

“Not only do we pick up the lanterns, but we pick up any other litter we can find along the way. We have dedicated litter pickers on duty who gather litter after participants have gone home.”

- Litter nuisance: farmers and other land owners have to clear up the remnants of sky lanterns.

- Risk to animals: frames can contaminate forage crops which are later fed to the animals. The frames of sky lanterns can cause suffering or even kill farm animals if they are eaten. Animals can get tangled in or injured by the sharp wire frames, and bamboo framed lanterns can splinter, causing serious injuries if ingested.

- Major fire risk: once lit and let go you don’t know where an ignited lantern will land. Fields of standing crops, hay and straw stacks, farm buildings and thatched roofs are all at risk.

- False alarm: the NFU says the Coastguard has reported sky lanterns being mistaken for distress signals, and the Civil Aviation Authority is concerned airborne lanterns could be drawn into aircraft engines.

Australian farmers are piling pressure on the Opposition Labour Party to support the proposed free trade with China.

The UK dairy industry is in turmoil with milk price below the cost of production. The National Farmers Union says 450 English and Welsh farmers have quit in the past 12 months.

Farmers are becoming more popular in England and Wales, according to a recent survey by National Farmers Union.

UK farmers are putting food production at the centre of the UK general election campaign. UK heads to the polls on May 7.