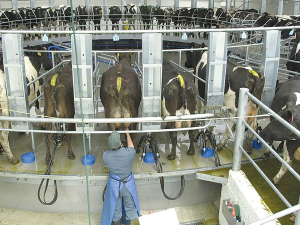 A DairyNZ-led project launched in July is looking into the benefits to farmers of 3-in-2 milking (three milkings in two days). It will run for three years.

Flexible Milking for Healthier People and Cows is funded jointly by the Sustainable Farming Fund ($500,000) and DairyNZ ($306,000) from farmers’ levies.

The project goals are that farmers and advisers will have the confidence to adopt, optimise and support the use of 3-in-2 milking, enhanced wellbeing (fewer hours spent working on farm and greater flexibility) and increased economic sustainability of farming businesses using 3-in-2 milking (through people and cow health).

The first year of the study will focus on learning from farmers already using 3-in-2 strategically. This will help guide development of resources and information. A farmlet trial will also be set up at Lincoln University Research Farm.

The project will expand to piloting 3-in-2 on commercial farms, including measures to evaluate the effects on people of moving to a 3-in-2 system.

A second trial will investigate the effect of different intervals used with 3-in-2, (as well as TAD and OAD) on milk production.

This second trial will also look at whether milking intervals could be extended to 21-hour intervals once a week. This would enable two milkings, on Monday, Wednesday and Friday, with one milking each on Tuesday, Thursday, Saturday and Sunday.

The focus in year three of the project will be on modelling to predict outcomes in different flexible milking scenarios.

For example, if a farmer wanted, he could go to once-a-day (OAD) milking during calving (to reduce work at a busy time), then go TAD through peak lactation, then 3-in-2 through mid-lactation, and to OAD near dry-off.

Dairy farmers will be given results from the project regularly and resources will be developed to help farmers make informed decisions regarding the use of 3-in-2 milking.

Each farmlet will be managed independently using the same set of decision rules.

Each farmlet will receive 150-180 kg N/ha, applied over seven applications.

Between planned start of calving and balance date the rotation length will be determined by the spring rotation planner.

After balance date a 22 day rotation will be targeted until mid-Feb, meaning each herd grazes a paddock every two days.

Paddocks will considered for silage if forecast residuals are above target for more than three days or if pre-grazing cover is above 3100 kg DM/ha (and feed wedge allows).

A 28-29 day rotation will be targeted mid-February to mid-April, and 44 days from mid-April to the end of May.

After calving, cows are milked once-a-day for the colostrum period and then enter their allocated herd.

For 3-in-2 this means milking times of 5am, 5pm and then 11am the following day.

For TAD this means milking times of 5am and 3pm.