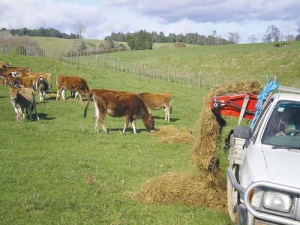 A Toyota Hilux fitted with a square bale feeder does the trick on Ross Alexander’s farm.

Pakarata sits on the western flanks of the Kaimai-Mamaku Ranges, at 335m altitude, overlooking Okororie in Waikato.

Farmed by Ross Alexander and his family the area amounts to 370ha owned, and the remainder leased on the adjoining boundaries. The farm carries 1400 sheep and 40 breeding cows, and carries a few mobs for dairy grazers from the locality.

After working as a professional shearer, with many seasons in Wales and Scotland, Alexander returned home to take over from his father, and carried on with an interest in breeding, genetics in particular which had sat dormant for a few years.

That particular interest extends to a breeding stud of 350 ewes selected for their resistance to facial eczema (FE), with the horrific damage it does to the livers of the sheep it affects.

The history of the stud can be traced back 40 years. Regular and somewhat expensive testing show markers which indicate resistance and stock are selected accordingly. The resultant rams in particular are much sought after throughout the country, and the stud has been recognised as the most FE tolerant stock in New Zealand.

The 40 breeding cows also show that interest in selective breeding, as they came from an AgResearch trial of breeding for twin calves, and while described as a “bit mongrel” by Alexander, they are mated to Angus bulls and achieve a calving rate (cows put to the bull) of 110%.

With this type of stocking a large part of the workload is taken up with feeding duties, and utilising the 320 large square bales of silage and hay that are produced on farm. Until recently this was done with a pitchfork, but the onset of the dreaded post 50 – a crook shoulder from wrestling with so many ewes, and the need to preserve a golf swing, suggested a change was needed.

Alexander describes himself as “borderline ADHD”, he likes things tidy on the farm, and he doesn’t want to go the conventional tractor and bale-feeder route and churn up the ground. So they approached The Feeder Leader Company in Taupo, coming up with a solution that utilised the farm’s 330,000km Toyota Hilux.

They modified a square bale feeder to run with a self-contained power pack using a Kohler 14hp engine, a 24L/min hydraulic pump, and a 60L reservoir to keep everything running cool.

Once started the direction of the bale feeder is controlled by a key pad in the cab and couldn’t be easier. The only modifications to the Toyota was the fitting of a spring assist kit for $800, which raises rear capacity to 1500kg, and is well within the 500kg feeder and typical 550kg bale weight

Three months later, and after 150 bales across it, the conveyor is performing faultlessly.

Says Alexander, “I’ve put the pitchfork in the back of the shed. The only thing I need now is a sharp knife to remove the plastic wrap and string from the bales.

“I thought I might have to change to round bales because I was unsure of square bale feeders; now I’ll stick with squares that stack so much tidier.”

One thing’s for sure: the golf handicap is going to come down.