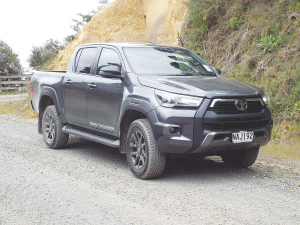 Fast forward five years and 2020 sees the arrival of the MY 2021 versions with the biggest changes yet.

Marketed with the slogan “tougher than we can imagine”, the 2021 models show that Toyota has taken notice of customer feedback to deliver more power and more comfort, balanced by less fuel consumption and less noise.

First impressions see styling that is much bolder, with a distinct nod to the global Toyota family, particularly North America. Bold accent lines are complemented with a particularly striking frontal aspect, alongside dark alloy wheels and front and rear LED light packages.

Hopping into the vehicle for a first drive, the standout impression is one of quietness. There is a new engine – up 20kW from the previous version. This includes a new block, pistons and turbo, with increased fuel pressures and a revised cooling package. Indeed, at start up and idle, there is little engine noise and only when pushed very hard does the serenity depart.

While that extra power isn’t immediately apparent, a glance at the speedo tells us were going quite quickly – even when the tacho is only showing about 1600rpm. This fact was confirmed by the driver of a very gaudy looking car with blue roof lights, who handed over his first paper-based prize one morning at 6.30am!

Also, quickly apparent is the improved ride quality, with a set-up that has lost the typical “bouncy” rear end associated with unloaded utes. In this area, Toyota has modified, and in some models, increased the number of leaf springs, recalibrated the shock absorbers and beefed up the suspension mounts.

These improvements, along with a new variable rate power steering pump, deliver a more pliable ride that is largely unaffected by bumps or corrugations and steers in the direction you point it. In addition, the revised cab mounts also serve to reduce vibration from the road and appear to help to reduce tyre noise.

Living with an SR5 Cruiser for a week proved a pleasant surprise for this reviewer who usually favours the softer ride of an SUV – while also having those impressions confirmed by the domestic manager who dislikes utes for their “jarring” ride. On a Sunday jaunt from Raglan to Kawhia, that took in more than 60km of gravel along the Whanga Coast, ‘Er indoors’ had a smile most of the way – made wider by a double scoop of Hokey Pokey at the seaside.

In the cab, the seats were comfortable and supportive with plenty of adjustment. The controls fell easily to hand, with the main 8-inch and supplementary 4.2-inch screens offering plenty of control and information.

Off-road drivers are aided by Hill Start Assist and Down Hill Assist to take the guesswork out of difficult terrain.

Meanwhile, new for 2021 is a rear automatic Limited Slip Differential on all 4WD double cab variants that also works in 2WD mode.