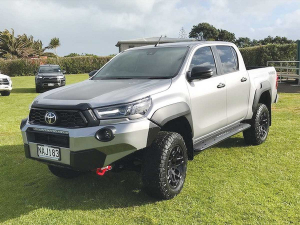 The Mako will be built to order at Toyota NZ’s vehicle operation facility at Thames.

The recent launch of the MY 2021 Hilux gave us the answer, with the inclusion of the Hilux Mako. Which arrive by air, under an ex-US military Blackhawk helicopter, at a windswept beach in Taranaki.

Taking its name from the efficient predator that is said to be the smartest and fastest shark in the ocean and designed by kiwi’s, the Mako will be built to order at Toyota NZ’s Vehicle Operation Facility at Thames. This plant is already familiar with personalised fitouts for the likes of fire, rescue and utility companies.

Toyota NZ chief executive Neeraj Lala suggests that initial response from dealers, including the placement of orders, means the company expects to sell 250 Mako’s each year – or more as we emerge from the troubles of Covid-19.

Based around the range-topping Hilux SR5 Cruiser, the Mako will feature the same 2.8 litre turbodiesel, upped to 150kW and 500 Nm torque for 2021, and featuring the same towing and carrying capacities of 3500kg and 970 kg. respectively.

Available in automatic transmission only, the Mako gets a steel front bullbar and a unique front fender, model-specific flared wheel arch extensions and 18-inch black Rhino alloys fitted with Maxis Razr, off-road rubber. The rear bumper incorporates a step and like the front, a pair of towing hooks – while along the flanks – heavy-duty running boards sport the Mako logo. In the cabin, RVE sourced leather bucket seats offer a well-supported ride, with the ‘chunky” leather-clad steering wheel ensures the driver stays in control on the rough stuff.

For those intending on taking this Hilux track-bashing, the suspension has been reworked to feature ARB’s Old Man Emu layout. This gives the truck a 40mm front and 50mm rear lift.

As part of the package, BP-51 bypass dampers, with user-adjustable compression and rebound damping settings, allow the user to configure the Mako to the job in hand. Further upgrades include large brake rotors and braided stainless-steel brakes lines to resist brake-fade and a soft pedal during extended use.

Also, worth a special mention is the Mako nameplate, located in the engine bay, announcing in typical Kiwi fashion that the vehicle is “handcrafted by the good buggers at Toyota.”

• Be sure to catch our drive review of the new 2021 Toyota Hilux in the next issue of Rural News.