Waste milk as a feed? 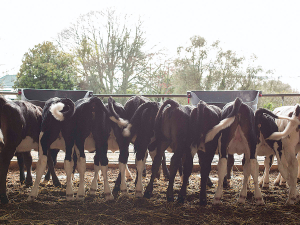 Waste milk has traditionally been fed to calves as it can’t be sent for supply. But is this a good idea? DairyNZ senior scientist Jane Lacy-Hulbert investigates.

The increased focus on responsible use of antibiotics has raised a question about waste milk’s value as a feed source for calves, and the risks this practice might pose to the wider environment.

Waste (or ‘red’) milk is produced by lactating cows when they’re sick and receiving antimicrobial treatment for diseases such as mastitis. It also applies to the milk produced in the withholding period, which can be three to four days after treatment.

Exposing a bacterial population (such as the calf’s developing digestive tract) to low concentrations of antibiotics may encourage bacterial growth with existing resistance genes. It could also lead to other bacteria mutating and developing new ways to resist antibiotics.

The risk is that calves consuming this milk will shed antibiotic- resistant faecal bacteria into the environment. This could have unintended consequences for your calves and for the future usefulness of the antibiotic.

This is backed by a substantial review published in the European Union in 2017. The review found that shedding was more pronounced by younger calves (two to three weeks old) than by six- to seven-week-old calves.

Unfortunately pasteurising waste milk won’t deactivate the residues as most antibiotics are heat-stable.

Although there are few studies on this aspect, it’s likely that antibiotic residues would interfere with calves establishing good gut bacteria, or that pathogens and viruses from older, sick cows could infect the young calf. If there were more antibiotic resistant bacteria present in the gut these issues would be harder to control.

Although waste milk may be a convenient feed for calves, is it worth risking the health of the replacement calf or the environment? One thing is certain: it cannot be fed to bobby calves, as the calf’s gut is likely to absorb the antibiotic residues and cause the carcase to be rejected.

• Find out more about calf care at dairynz.co.nz/calves