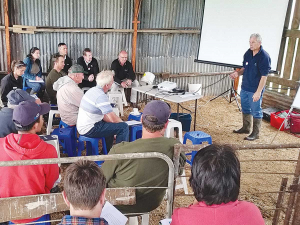 Rosie Hughes says SMASH events like this play a big part in upskilling farmers to manage their businesses.

A midlife crisis and the desire for a new challenge were the catalysts for Nathan and Rosie Hughes’ switch to smaller herd dairy farming three years ago.

The Hughes owned a lifestyle block and they had built up a successful arboriculture business. They sold up to pursue a new career as the owners of a 80ha, 240 cow farm, situated on peat soil between Cambridge and Te Awamutu in the Waikato.

Rosie Hughes notes that there were a number of factors driving their change.

“My parents were farmers, so that is why we thought of going farming,” she says.

“We had a small business and it had got to the stage where we had several employees and Nathan was working long hours with no help in sight. Whereas, with the farm, we’ve got a retirement plan and a plan for the children. It means Nathan can take the kids with him on the farm. So he is still working long hours, but with a lot less stress, and it is more of an asset-based business.

“In a lot of ways it was a monetary move for us, and more of a challenge. It also suited Nathan, because it was something he could retrain as and he liked working outdoors. Everything fell into place, the farm came up for sale and it was within our price range.”

A smaller farm has provided the Hughes with an excellent training ground.

“I am glad we went in as owners,” says Hughes, “because nobody would have taken us on as sharemilkers, or lower, and we wouldn’t have gained the experience as quickly as we have. It was our money on the line, so we had to do the best we could. We are quite production driven, we want to pay the mortgage as much as we can.

“Nathan was raised in town and had a total of one week’s milking experience in his life, while I was raised on a dairy farm, but quickly learnt there is a lot more to dairying than playing around with horses! I do believe we mostly bluffed our way through that first year, listening to experienced people, and often having no idea what they were talking about, but being amazed at the amount of widespread knowledge that every farmer seemed to have.

“Other farmers have been so helpful, we really appreciate that. It isn’t a competition and that is really noticeable coming from the small business community.”

Hughes believes smaller farms still have a valuable part to play in the industry. “There is a role for smaller herds; people get tired of employees, they want something that is manageable. You can be just as profitable with a smaller herd as a big herd. You don’t need a 150ha property to make good money, as long as you are focussed on getting the most out of your farm.”

She also says SMASH events have played a big part in upskilling them to meet the challenge of running their own dairy farming business. “We like the SMASH events so much because they are at a good level, they are deep enough to be worthy of going, and practical enough that we can use them in everyday life. It is really useful to have that next level of education, even around spraying and fertilising, stuff that you wouldn’t get from reading the paper.

“Getting off the farm to go to an event is like a holiday! We’re so refreshed afterwards, it’s like being away forever!

“People should make the effort to go to SMASH events. Just go! The worst that could happen is you get a really good lunch. They are very beneficial and you learn a lot of new research and practical information that you can use for your farm. They have always got a good selection of topics, so if one topic doesn’t push your buttons, then another probably will.”

Boosting the revenue on a smaller farm

Lisa Groen is gradually taking over the reins of the family farm, near Te Aroha, Waikato, ten years on from starting to learn the ropes.