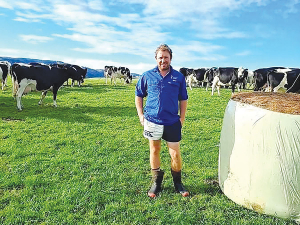 Michael Kiernan will talk about his lucerne crop at the field day this week.

Michael Kiernan's lucerne crop was a godsend in the dry Southland summer this season.

Attendees at the upcoming Smaller Milk and Supply Herds (SMASH) field day near Glenham this week are going to hear all about it, his zero bobby policy, and how the rest of his system operates.

Alongside Michael, expert industry speakers Paul Edwards (DairyNZ) and Doug Edmeades (soil scientist) are going to delve into the pros and cons of flexible milking and how you can get the most out of your soil to support pasture growth.

Michael has spent his last seven seasons sharemilking 180 Friesian cows on Dean and Sarah Rabbidge's 72ha farm and has used 10-in-7 the last two seasons. He trialled it as tool for managing the dry summer conditions on farm and after talking to friends about their experiences using it.

"This is our second season during 10-in-7," says Michael.

"I could've done 16 hours, but I just don't like it. It doesn't suit our farm and our paddock sizes. 10-in-7 is perfect; our bigger paddocks do for the once a day, it actually suits our system really well."

He does note its impact on production, and he sees a spike in his SCC, but believes the pluses outweight the minuses for him.

"They reckon you drop production by 3% I think," says Michael. "But you've got your shed cost, your labour saving - you've got to think of your own personal time too. Like those once a day milkings in the weekends, they're pretty handy."

DairyNZ has carried out extensive research on flexible milking options. At Michael's field day, Paul Edwards is going to talk about the options, their impacts on production, profitabilty, and SC, and how farmers can determine which milking interval is most suited to their operation.

Michael is also looking forward to hearing from Doug Edmeades who has had a long and notable career as a soil scientist.

"It'll be interesting because we've got three different soil types on farm and it's not a steep farm, but it's hilly, and so you can have 3,000 cover at the top, 1,500 at the bottom, and our potassium levels are a wee bit lower, so it'll be good to see him here, just to get a bit of an insight."

Michael has been in New Zealand for 14 years, but is originally from Ireland. He fell in love with New Zealand after being persuaded to visit by a couple of Kiwis he worked with in the UK.

"We flew into Christchurch and drove down the West Coast and I though, 'Oh, this is an amazing place'. Then we got to Invercargill, went out for a meal with these guys, went onto their farm, and they offered me a job.

"My grandparents were dairy farmers so I've always been around farming. I tried a trade, as an electrician. I did enjoy it, but I enjoyed farming more. I've always liked farming - the outdoors and the lifestyle, and the Kiwi system.

Michael is a believer in the value of attending industry events, where he learns new techniques, tips and tricks to try out on farm are challenging.

"It's good to realise that you're not the only one that's got no grass, and it is good to hear other people and get their opinions too.

"Nobody has the same system. You'll pick up ideas, take them back home, and try something new. It could be something really simple but really useful."

To find out more about the SMASH field day at Michael's farm, and to register, go to the SMASH website at www.smallerherds.co.nz