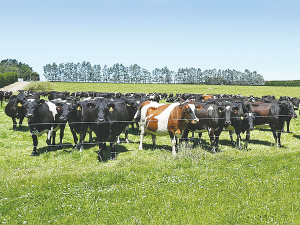 About 9% of dairy herds nationwide are on full season once-a-day milking.

He says OAD farmers can choose what time they milk, so a later milking time may attract workers who find early mornings hard, and people getting young children off to school.

About 9% of dairy herds nationwide are on full season OAD, but Beagley says this is just an average. In Northland about 25% of all herds are OAD. This variation is partly, but not exclusively, due to the weather.

“In many cases it’s about the lower milk yield per cow in the region,” he says.

“We know that switching to OAD will result in 2% to 16% lower production. If a farmer was doing 300kgMS, already the potential loss would be a lot less than if he was doing 400kgMS/cow.

“So the people who are on twice a day (TAD) are probably only going to see a 2% drop in production.”

Beagley says farmers are turning to OAD for various reasons, but he notices that with new regulations and changes in the pipeline for dairy farmers, milking OAD has attractions.

The lower OAD milking workload allows more time for animal and people welfare and there is less stress overall.

Beagley says there won’t be a OAD conference this year for various reasons but there will be one next year. The organisers want to allow more time for new science about OAD to come through. With an annual conference the risk is that old science simply gets regurgitated.

Key messages are on pasture quality, and farmers having the grass they need at the peak of the season -- ‘peak high, fly long,’ they say. This is because OAD farmers can have potentially more days in milk and generally have a very compact calving because of improved reproductive performance. They need to take advantage of that by getting the cows to peak high and many people struggle with that.

Beagley says some of this relates to cow quality which they can’t change overnight. But farmers can ensure they have sufficient high quality pasture going into the second round.

On OAD profitability, Beagley says the focus should be on reducing costs -- especially for labour -- to counter the drop in production.