Balers have it all wrapped up 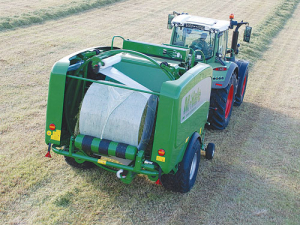 The development of round bales for silage or baleage in the late 1980s made a huge difference to forage conservation, by removing the need for expensive and labour intensive silage clamps.

First incarnations used twine for tying, making for time consuming and messy removal, so net wrap was quickly adopted, leading to high output in the paddock and easier feeding out.

Back then, several companies experimented with barrel-wrapping the bales for weather protection, particularly for straw stored outside, but technical issues with the composition of films available at the time led to inconsistent results, mainly due electrostatic build-up in the machines.

Today, a number of manufacturers and different film technology mean that film-on-film technology has gained a sound following: the bales are wrapped with wide film initially, before the normal outer covering is applied. The composition of the inner film allows it to be pre-stretched by 7-30% depending on the manufacturer, with the outer wrap normally applied as four layers and pre-stretched by 55 to 70%.

One industry stalwart, McHale, distributed locally by Power Farming Wholesale, suggests film-on-film is a game-changer, not least because of a better end-product because of the immediate exclusion of oxygen, which leads to higher dry matter and less mould, and because of easy film removal, less waste and easier recycling. The only real negatives are the need for the operator/contractor to carry two types of film, and a premium of about $1 per bale over the traditional net wrap/film technique. This premium is likely to disappear as the technology gains acceptance.

McHale claims the concept can result in up to 15L of extra milk production per bale because of ‘sweeter’, more energy-dense and protein-rich fodder. These claims are backed up by independent trials by Dr D. Davies of Silage Solutions Ltd in the UK.

Comparing bales made by traditional net wrap and film versus the film-on-film option saw an increase in overall dry matter of 2%, but DM losses due to moulds were reduced by about 80% from 8.64kg to 1.69kg per bale, with bales weighing about 865kg fresh weight. Meanwhile, DM losses during storage fell by 7.5%, thereby showing that overall losses attributed to moulds and storage was reduced by 52%.

The new technology has major benefits, not least in feed quality, which will help to justify the slightly increased costs of consumables, which as previously noted will no doubt fall as the technique is more widely adopted.

Following three years of testing with clients worldwide, Ireland-based manufacturer McHale has added a bigger model to its range of variable-chamber round balers with the new V8 series.

Big machine rips into it

Machinery importer and distributor Power Farming has introduced a new weapon to its extensive cultivation arsenal in the shape of the Kverneland Turbo T.

On what should have been the second and third days of the cancelled National Fieldays, a group of Morrinsville businesses used June 11-12 to launch and run their own event.