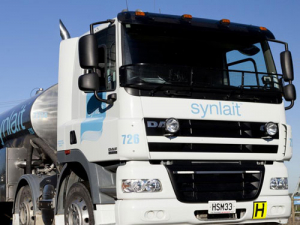 Synlait has signed up its first Waikato dairy farmers.

They will supply Synlait’s new Pokeno plant from 2019-20 season.

Synlait’s entry into Waikato puts pressure on Fonterra and Open Country Dairy, who have dominated the milk supply base in the dairy heartland.

Synlait says its milk procurement team has received a very warm welcome and a positive response from Waikato dairy farmers and rural professionals.

“Synlait’s Lead With Pride programme has been well received by farmers who want to be rewarded for the work they do in terms of environment, animal health and welfare, milk quality and social responsibility” he says.

“We’re also looking for a2 milk and winter milk, but farms don’t need to be a2, or have winter milk to supply us,” he says.

Milk supplied by Waikato dairy farmers will be processed at Synlait’s Pokeno site, currently being built on McDonald Road. The build is on track, with the first nutritional spray dryer expected to be ready for the 2019/2020 season.

Once commissioned, the dryer will be capable of producing up to 45,000 metric tonnes of nutritional powders each year. These include infant-grade skim milk, whole milk and infant formula base powders.

A2 Milk expects strong first half sales supported by brand and marketing investment in China and the United States.

Canterbury milk processor Synlait is adding another business to its stable.

This old mutt has been contacted by many concerned individuals about the role the former Synlait boss John Penno is playing in pimping the Government’s freshwater proposals.

It's time for New Zealand to pause in its approach to freshwater, Synlait founder John Penno says.