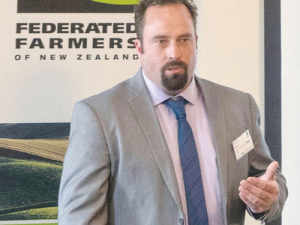 McIntyre is involved in a “broad review” aiming to improve several issues with the VOSM.

Negotiating teams from both the sharemilkers’ and the sharemilking owners’ sections had been working on it a for a couple of months and hoped to put up a draft for consultation, perhaps as early as June, he said.

“We are looking at combining the variable order agreement and the contract milking agreements. The roles are very similar; the only real difference is the method of payment.”

That would allow for hybrid agreements to manage milk price volatility. For example, a milker might get 80 cents/kgMS, plus 8% of the milk cheque. The milker could rely on the 80c/kgMS to cover all the core costs of staffing and shed expenses, while only the 8% of the milk cheque would be subject to milk price fluctuations -- positive and negative. McIntyre said the actual figures could be tailored to the milker’s ability to manage milk price risk.

“If they happen to have plenty of money in the bank or a lot of equity and they know they can withstand a reasonable drop in milk prices, then they can have a percentage share that is higher and a contract rate that is lower.”

Combining the VOSM and the contract milking agreements would encourage more hybrid agreements and make it easier for them to be put in place, he said.

Variable, or lower-order, sharemilking refers to milkers who do not provide their own herd. The milkers provide the labour and receive an agreed percentage of the income -- typically 18-29% (according to DairyNZ figures) -- and cover some of the costs. A 300-cow rule specifies that sharemilkers of herds of less than 300 must receive at least 21% plus costs.

McIntyre said the rule is aimed at protecting sharemilkers, especially those new to the industry and getting into business for the first time.

He said they need to be protected in three respects: firstly from poorly set-up contracts where even in a normal year they would struggle to make much money; secondly from milk price risk, where a contract may have been set up to give a certain income for a particular milk price but left them working for free or at a loss if the price fell; and thirdly they need protection from climatic risk. Climatic extremes could hit production by 10 -- 15% even if the milker does everything right and manages the farm well.