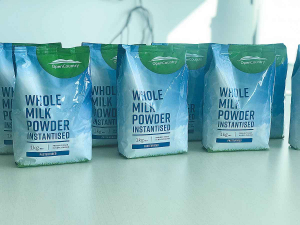 11 tonnes of OCD's milk powder will be distributed through The Foodbank Project over the coming weeks.

Open Country Dairy (OCD) is donating 11 tonnes of milk powder for distribution to the poor and needy.

The company says it recently produced 11,000 1kg sachets of milk powder to support The Foodbank Project across New Zealand.

Chief executive Steve Koekemoer says the product will be distributed around the country over the coming weeks.

“Covid and the associated difficult economic situation means that many New Zealanders are having a tough time currently,” he recently told OCD suppliers. We felt that we wanted to give back and support our communities and the people in need.”

The Foodbank Project sends out 2000 parcels a week; demand is expected to double when the wage subsidy is discontinued.

OCD says, as a business, it is glad to have the opportunity to help those in need.

Tessa Reardon, for the Foodbank Project, is assisting OCD with allocating donations to communities and food banks across NZ, specifically in regions where the company’s suppliers are located.

About 240 bags will be sent to hubs in Invercargill, Dunedin, New Plymouth, Palmerston North, Hamilton and Wanganui, and then distributed to smaller communities and food banks.

The Foodbank Project says that the milk powder is put in most of the food parcels and is the ideal staple as it doesn’t require chilling and can be mixed to create other food.

The country's second largest milk processor says the tail end of the 2020-21 season is turning out positively for the industry.

OCD not getting over-excited

NZ’s second-biggest dairy processing company says it is taking a pragmatic and cautious approach, as it deals with the impact of COVID-19.