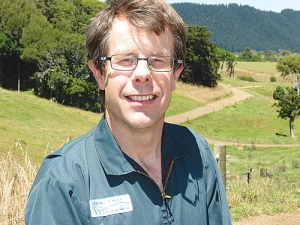 Facial eczema (FE) has hit Horowhenua much earlier than normal due to lots of rain and high temperatures.

Speaking at a DairyNZ discussion group in the region, Horowhenua veterinarian Keith Christensen says spore counts in the area are the highest seen at this time of year for several years.

He says the region had a dry summer and then suddenly a lot of rain and heat. Once the rain hit, the dry matter on the ground was ideal for spores to grow.

Facial eczema is caused by the toxin sporidesmin, produced by the fungus Pithomyces chartarum which grows rapidly in warm wet pastures mainly from January to April, although FE has been known to occur in May.

The sporidesmin damages the liver of an animal and makes them sensitive to light, causing severe inflammation on parts of the skin especially around ears, eyes and udder. Soil temperature also gives a push to the disease.

"The conditions will vary from farm to farm and will depend on how individual farmers have managed their grazing and how much dead matter they have around," says Christensen. "In general you feel the air is rotting as you drive around. Sometimes it's very tropical and so the spore counts across the district are high."

He says many people spray their paddocks to ward off FE but this year in Horowhenua it has caught many farmers unawares and the best way of dealing with it is to put zinc in the water lines.

This reactive approach is cost effective because it allows farmers to wait until there is a problem before they use zinc. And the zinc can stay in the shed for use next year.

Another option is to put stock onto a crop where there is not the same risk of spore build-up.

Stock must be fit to travel