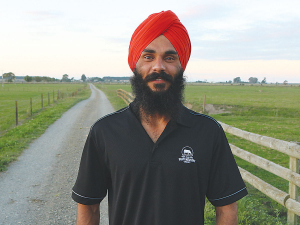 Southland contract milker Janamjot Singh Ghuman is happy to have his job back after being stuck in India for five months.

Janamjot Ghuman was expected to arrive in Auckland Airport last Friday with his wife, Mandeep Kaur, after an arduous journey that included 15 days in Serbia. After a 14-day quarantine in Auckland, the couple will be allowed to travel to Southland.

Ghuman, who got married last year, travelled to India on February 13th to bring his wife back.

However, before their return flights, booked for April 20th, the New Zealand Government suspended arrivals from India due to a sharp rise in Covid-19 cases in India.

Ghuman, who has worked in the NZ dairy industry for 10 years, was due to start his first season as a contract milker on June 1, milking 450 cows for Kathy and Mike McDonald near Winton.

He started at as a farm manager and in 2019 won the Dairy Farm Manager of the Year award for Bay of Plenty region and was a national finalist in the NZ Dairy Industry Awards.

Ghuman told Dairy News via email that, as required by NZ immigration authorities, the couple were spending 15 days outside India before they can come to NZ.

“We travelled first to Russia and the cases were spiking there and we got worried,” he says. “So we decided to move from there to Serbia. It’s a much safer country and at this point case numbers are below 100.”

Ghuman is very grateful that he could save his contract milking job but says the events of the past five months have been challenging.

“The whole thing has made a huge impact on the savings I had. I have lost money with flight re-issuance and hotel charges and [I’m] going to lose nearly a month by doing quarantines in NZ and 15 days in Serbia.”

Ghuman says he managed to save his job by organising staff to fill in for him.

“Now I’m feeling like half of the battle has been done as I’m out of India and have some certainty to be able to go back and start the job in early August, which is about right at calving time.”

Ghuman also thanked the farm owners Kathy and Mike McDonald for their support.

He even offered the McDonalds the chance to opt out so they could hire another contract milker in his place.

“But they said, ‘it’s okay, we will work this out’. Their support has been there, otherwise I wouldn’t have the job. They organised a lot of stuff on farm and helped out as much it was needed.”

Alliance Group will host a series of virtual roadshow meetings next month.

The technology used to detect Covid-19 in wastewater is now being used to help dairy farmers manage Johne’s disease in their herd.

Seamless is how South Auckland dairy farmer Brian Gallagher describes the way the system allows him and his staff to cross the Auckland border weekly into the Waikato to look after stock.

A fund has been set up to generate carbon credits through growing pine plantations on steep North Island hill country.