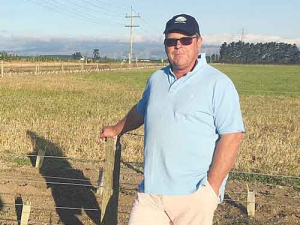 Canterbury dairy farmers are putting money where where their mouths are and playing their part in helping to improve water quality, says Canterbury dairy leader Tom Mason.

“And it’s working. We have hard proof that water quality in the region is already beginning to show signs of improvement as a result of farmers fencing off waterways to exclude dairy cattle, and planting out riparian buffer zones that help to filter nutrients before they reach the water.

“The latest data from Environment Canterbury (ECan) shows that 90% of the region’s farms have taken action to get a land use consent, but a number are on waiting lists for nutrient budgets. A farm environment plan is a requirement of their consent, so we can say with confidence that the vast majority of farmers have an environmental plan, also known as a sustainable milk plan (SMP).

Under the Canterbury Land & Water Regional Plan, many farms now require a consent to farm, requiring them to meet environmental responsibilities, including adhering to nitrogen loss limits.

ECan chief operating officer Nadeine Dommisse said ECan began a rigorous, targeted campaign earlier in the year to ensure that every farmer knew of their responsibilities and how to approach them.

At least 900 farmers have acted, and the remaining 80 had received formal warning letters in late November. Dommisse said ECan was aware of those on waiting lists and they would be exempted from compliance visits scheduled to begin early next year. “We know it takes time to complete a nitrogen budget, and we would rather these were done well.

“What’s most important is that farmers are taking the necessary steps towards gaining their land use consent, whether that is implementing good management practices, determining the nitrogen budget, creating a farm environment plan or applying for consent.”

Resource management officers will soon start visiting farmers who have yet to either act or advise ECan of their progress.

“We’ll be visiting anyone who has not yet taken action or contacted us, because we are very serious about those who are not on track,” said Dommisse.

“Next year we’ll start looking at issuing abatement notices to those who have still to take action.”

Mason said the SMPs are not just to get farmers to meet regulatory requirements, but to get them running “truly sustainable dairy farm businesses that strike a balance -- best for the farm and best for their people and the environment”.

DairyNZ catchment engagement leader Angela Harvey said DairyNZ first developed SMPs about five years ago, when the primary purpose was to raise farmers’ awareness of environmental risk areas, and to have them start working towards a more sustainable footing before regulations were introduced.

“Many farmers had already been well on this journey, so having the plan focused their activity on the areas where the most environmental gains could be made.

“We helped the farmers pinpoint what needed to be done and involved consultants to work with them to explain the reasons why certain options were better than others, and provide detailed plans and directions for the work to be carried out.”

Harvey said farmers find the SMP process more rewarding than simply being told what to do by a regulator.

“Along the way, farmers have also told us they have been gratified by the fact that farming to SMPs has also helped them to be sustainable across the board, not only achieving better outcomes for their environment, but also for farm teams and business profit.”

Meanwhile, an Ecan report into recreational water quality has found that, of 52 monitored freshwater swimming sites, 12 have improved one grade and four declined.

ECan chief scientist Tim Davie said it assesses the health risks from faecal contamination at popular swimming sites in the region through the swimming season.

“This year 12 sites have improved. The year before, 10 sites improved and the year before that only five improved, so the trend is in the right direction,” he said.