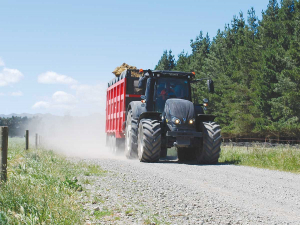 Valtra tractors are manufactured in Finland and are popular in North Canterbury.

Based near Hawarden in North Canterbury, Patoa Farms has operated for more than 20 years.

Along the way, it has scooped numerous awards for its farming operation and environmental performance, including winning the Lincoln University Foundation’s South Island Farmer of the Year in 2014.

Today, the farm runs 5500 breeding sows, living outdoors in their natural environment, a practice that is falling out of favour with many pig farmers

“Pressure is coming on farmers to have a good environmental profile and we are putting a lot of effort into that,” says owner Steve Stern. “We measure what we do so we are more aware of what we are doing, and we try to use the best science that is available.”

Although Stern stepped back into a governance role in 2013, his daughter Holly oversees the day-to-day running of the business, which in total employs around 60 people.

Like any large-scale operation, to run efficiently, means choosing the right machinery. So, when a new tractor was on the wish-list, with a Valtra N93, a N92, a T151 and an elderly B900 already on the farm, a 405hp Valtra S394 ticked all the boxes.

On arrival, the new Valtra got straight to work powering a rock crusher, turning items removed from hump and hollowing paddocks into gravel for roading throughout the farm. Lately, it’s getting an easier life, mainly towing a 42m3, triple-axle K-Two ejector trailer, which is used to move compost, alongside carting silage.

Valtra tractors are manufactured in Finland and are popular in North Canterbury. However, local Valtra dealer at Northern Tractor Services Simon Moir believes Patoa Farms has the only S394 tractor in New Zealand so far.

Canterbury-based Quigley Contracting’s tractors of choice are Fendt – preferred for their technology and versatility.

Deutz Fahr has introduced the new 8280 TTV, which is aimed at filling the gap between its current 7 and 9 Series models.

Hungry Kiwis pig out on free NZ pork during lockdown

NZ Pork is hailing the success of a scheme where the Government bought surplus pork and had it delivered to food banks to counter the disruptions of the Covid-19 pandemic.