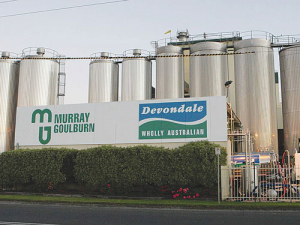 Murray Goulburn has announced a conservative opening forecast in Australia.

United Dairyfarmers of Victoria president Adam Jenkins says it recognises MG is in a challenging situation trying to navigate its way from the past into the future, but a A$4.70/kgMS opening price presents a serious challenge for dairy farmers still recovering from the events of last year.

“The importance now is for MG to deliver returns to farmers as soon as the returns are realised in the marketplace,” Jenkins says.

The UDV passed a motion at its annual conference in May to call on milk processors to release their opening prices by June 10 each year, ahead of the season.

Jenkins says the early release of an opening milk price showed Murray Goulburn had listened to the industry and the farming community.

MG chief executive officer Ari Mervis says that in setting the forecast the co-op had taken a “prudent view on key assumptions for commodity prices”.

“Although global commodity prices have shown some recovery since this time last year, whole milk powder and particularly skim milk powder prices remain under 10 year averages,” he said in a letter to suppliers.

“This has been somewhat offset by firmer butter and cheddar prices. We have also had regard to Global Dairy Trade auction results over the past two months and current futures pricing, both of which suggest some ongoing price volatility in global markets.”

Mervis says while the opening and forecast prices are an improvement on the current season, Murray Goulburn’s performance remains below his expectations.

He says the co-op has begun a comprehensive review of all aspects of MG’s strategy and corporate structure, including its profit sharing mechanism and capital structure.

“I see this review as a fundamental next step to strengthen MG for the future,” he told suppliers.

“While the previous decisions resulting from the manufacturing footprint review, including the announcement of three site closures, were necessary, I do not consider them alone to be sufficient to move the business forward.

“Given the timeframes associated with the site closures, the expected financial benefits are not expected to be fully realised by MG until FY19.

“A further update on the strategic review is expected to be provided at the time of MG’s full year results in August.”