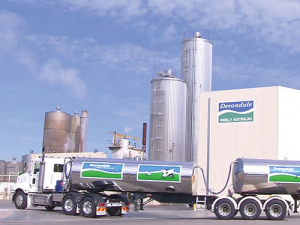 Spencer says Fonterra is expected to be the second largest processor at 2.5b L.

“Saputo’s milk intake will depend on whether they make further asset sales and let some milk go with those units (such as fresh milk plants and other sites that don’t fit their business),” Spencer told Rural News.

“One hard question is whether they can win back some milk that has recently left MG for other processors; part of the deal [with Saputo] is a loyalty bonus aimed at retaining and rebuilding supply.”

Following the turmoil over low milk payout over the past two years, some MG suppliers switched to other processors; Fonterra saw its milk pick-up jump from 1.6b L to over 2b L, making it the biggest processor.

In September Fonterra chairman John Wilson told Rural News that its Australian plants have reached capacity and now have a waiting list of would-be suppliers.

MG’s milk supply had fallen from 2.7b L last year to under 2b L this year.

MG’s demise signals the loss of the last major dairy co-op in Australia.

Warrnambool Cheese and Butter was also once a farmer-owned co-op, before listing on the ASX and ending up in the hands of Saputo.

Spencer says MG’s sale means there is at last some consolidation in processing and fewer players left in the domestic industry. However, this will not change much, he adds.

“The biggest difference will possibly be in farmer leverage in the farmgate market without a major farmer-owned processor, but MG has not been a strong price setter in the past other than for the two years when it paid over the odds and then crashed as a result of being unable to afford those costs.

“The industry may shrink with the loss of MG as a number of loyal co-op diehards will probably exit rather than go with an overseas processor.”

Reaction from MG’s farmer shareholders has been mixed. Spencer says there is a lot of anger and grief that it has come to this.

“Some farmers were hoping for a better deal to come from the clouds at the last minute, but the realists are getting on with it.”

Spencer says interestingly, MG chairman John Spark, who has led the review and sale process as the best option available, got more than 80% of votes from shareholders at its annual meeting recently.

Spark joined the MG board as a special director in March this year.