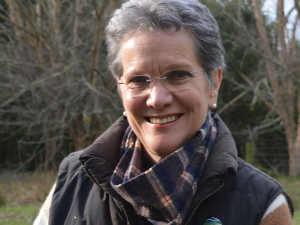 She says the collapse of Australia’s biggest dairy co-op Murray Goulburn and the demise of Westland Milk co-op on the West Coast is not about their structure.

Shadbolt, a fierce proponent of the cooperative model, is aware of moves by some farmers and a few directors to return capital structure to the table.

“I say ‘no more of that please, we’ve had seven years of that already’, it is far better to put that energy into strategy.”

“To farmers who want to sell some shares my response is, ‘you can’t be half pregnant’ Being a co-op member means being a co-op member. Liken it to trying to share a golf club membership, who would get to play on the fine days and in which tournaments?

“Now the Westland boys have cashed up pretty nicely and there’s a group of Fonterra farmers who are saying ‘we can do the same’.”

Shadbolt says Fonterra directors carry the baton for the next generation -- “for the swag of people in front of you”.

“You carry the legacy of all the effort that people have put in place before you. It’s never about how to cash out. That would defeat the whole purpose of Fonterra being built.”

Shadbolt says good cooperatives, with well devised and implemented strategy, are proven globally to out pace and out last corporates, so the board should focus on strategy instead of wasting time on the capital structure.

“Given the challenging times, the board’s eye should be on strategy, on what’s going on globally.”

Another important debate at the board table is retentions, for cooperatives that is a key decision with respect to the health of the business. It is not always in the best interests of the cooperative to pay dividends.

“The view that when farmers get a dividend in cash they think they are getting a good return for shares is simplistic. It is the earnings that matter most and our farmers know that.

“Look at a2 milk and Synlait, those shareholders have never had any dividend yet their share value has gone up because the earnings have gone up.

“We [Fonterra farmers] have received the dividend but our share value has gone down.” So, of course, the flip side to the dividend debate is sensible use of the retentions, and being as brave to go into new ventures, as to back out when investments are not delivering.

Shadbolt says the losses Fonterra is suffering are from necessary write-downs.

“These are the conversations the board is having: what’s working and what’s fit for strategy.” She notes that all the recent asset sales were already being discussed when she was on the board last year.

To determine strategy the board members need to have “a strong global perspective”, it cannot just be about accountants crunching numbers. That perspective should involve a clear understanding of consumer trends and where science and our farming systems fit into our ability to deliver a point of difference. We are often too introspective in NZ when we look at problems, it is the global issues we should be recognising and responding too

Shadbolt, who leads agribusiness strategy and cooperative governance research and teaching at Massey University, believes she brought her global knowledge to the board.