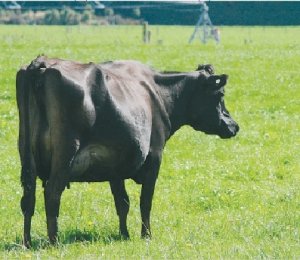 The herd, now just 642 cows where up to 700 have been milked in the past, has been split roughly one-third, two-thirds.

All 140 heifers went into the small mob from calving, topped up to 230 with low-condition score, mixed-age cows.

Where there's been a choice of paddocks ready for grazing, the small mob gets the best and closest to the shed.

"Milking takes about one hour for them from paddock to paddock," says farm manager Peter Hancox.

"They're at the cowshed for just 40 minutes. That's huge for their well being."

If they struggle to get to target residual, they're moved on and the larger mob comes in on clean up duties.

The policy appears to be closing the gap between heifer production and the herd average (see table) and while heifers started the season with higher body condition scores than last year, they've held onto that advantage.

There's a hint reproductive performance will be improved, with 10.8% not pregnant versus 13.8% last year, however the six week in-calf rate is back from 84% to 80%.

As the season draws to a close half the heifers have been moved out of the small mob, and more low condition score – below 4.0 – mixed aged cows moved in to maintain the mob at about 200 cows.

"So already we're thinking of next season," says Hancox.

DairyNZ body condition scores the herd fortnightly, rounding down rather than up, so an animal scored just under four is called a 3.5 rather than 4.0.

"We've no vested interest whether a cow's a four or a five," DairyNZ's Dawn Dalley told the focus day. "We call it as we see it. Sometimes the management team aren't particularly happy with that but Peter is able to use the information to flick lighter cows into the smaller mob and vice versa."

"That [pre-mating] is a busy time but it's an absolutely critical one... For the investment of two people for one afternoon you can get all that information. It's a little bit more difficult in a herringbone [shed] but we've got some ways of doing it."

If one condition score timing has to fall by the wayside, then the calving one is probably the one to let slip, she adds. The others are crucial to adjust management to help cows reach the target BCS for calving of 5.0 or preferably 5.5

DairyNZ's new feed allocation tool can help with that, by calculating the energy intake required per day to reach the target. Dalley says one farm it was piloted on last year had 110 cows at BCS 3.5 at the beginning of May, but by allocating them the 17kgDM/head/day of feed the tool showed they needed, they still reached their target by calving.

"It shows if you don't quite get it right through the autumn there are some options in terms of still salvaging things through the winter."

However, with feed being more expensive in winter, taking action to build condition score sooner rather than later is likely to be more profitable.

Hancox says the success of splitting the herd this year means the same will be done next year, and even earlier.

"This year we didn't split the herd until September. Next year we're looking at August 20. It will be a hassle with all the colostrums cows and reds, but we think it's worth it."