Ready for the big move 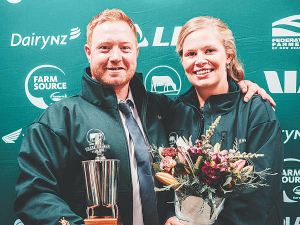 Marc and Nia Jones are getting ready to move farm on 1 June to a new sharemilking opportunity at a 370-hectare farm at Mamaku.

"We've got our new NAIT number and purchased the herd. There's about 570 cows, 70 heifers and around 100 calves. The animals are already on-farm so that means less hassle with moving," says Marc Jones.

The couple and their young family were contract milking 950 cows at nearby Tokoroa when they heard about the new opportunity.

They and their team of three staff expect to be very busy in the coming season.

"We're also PICA (person in charge of animals) delegates for the owner's Tirau farm and nearby grazing block where our young stock are going to.

The Jones are well versed on their NAIT obligations and register their animals using the farm management system MINDA.

"Nia and I share the duties with the tagging and registration of our animals. For raising heifers, we manually record the tag numbers and use WhatsApp to match the calving birth tag with a secondary tag identifier.

"For the bull calves, it's more involved and we use a Gallagher tag reader. The tag reader scans the tag numbers on the animals and then provides a file which you can upload into NAIT. At calving, we keep on top of our NAIT account each day, it's just easier to manage and less time consuming having to go back and do it."

For tag management, the couple rely on a Protrack drafting gate. When the herd come in for milking, they can be checked for missing tags.

Animal traceability is important to the Jones' even though the logisitics of doing it can be challenging sometimes. While current technology is not always keeping pace with today's on-farm regulations, the need for traceability is an abiding memory for Marc.

"I believe traceability comes from a good place. Growing up in Wales and working on farms as a youngster, I still remember the foot and mouth (FMD) outbreak and I would never want to see it again, it was devastating.

"You would think the risk of this awful disease of M.bovis coming to your farm or community are convincing enough reasons to ensure your animals are traceable.

"I do also believe in the value of being able to trace where produce has originated from and that provenance stroy, which customers and overseas markets are increasingly asking about," says Marc.

Moving day around the country appears to have gone relatively smoothly despite the disruption and uncertainty created by the Covid-19 pandemic.

Peter Burke looks at what Moving Day meant for some farmers in Horowhenua.

Top tips for a smooth move

As an estimated 5,000 dairy farmers prepare to pack up and move to new farms for the June 1 start of the new season, DairyNZ is providing practical assistance to help make the move safe and easier.