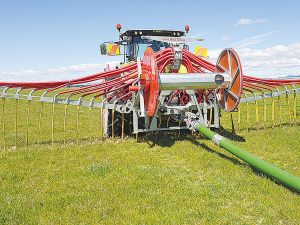 Mastek umbilical effluent systems provide a cost-effective, efficient method of distributing effluent onto the pasture without the need for permanent pipework that can be capital intensive and locked to specific areas.

Umbilical systems are extremely mobile and flexible, as well as allowing a controlled spread of effluent in the paddocks. Because umbilical systems allow you to spread where and when you need it, distribution can be tailored to suit the operation, as well helping to reduce leaching into waterways, ponds and streams. Umbilical systems also help reduce damage to races and farm tracks caused by heavily laden slurry tankers.

In operation, effluent is pumped from the storage pond to where it’s needed via delivery hoses carried on reels mounted on the front and rear of a tractor, often over distances that can exceed 1km.

At the pond, a stirrer is required to agitate the contents before being pumped through a large, flexible hose to a macerator unit on the tractor. The Mastek SuperCut macerator features a series of blades that can chop slurry with a high fibre content, creating a homogenous liquid that is pumped to the dribble bar distribution through the delivery hose and dribble bar.

The integral blades of the macerator are easy-to-change, but customers are reportedly pumping more than 120 million litres through their systems without need for attention. In the paddock, the ‘spreader’ tractor moves across each area towing the umbilical hose, while effluent is distributed through individual hoses mounted below the dribble bar.

Offering spreading capacities of up to 200,000 litres per hour, 1 million litre days are easily achievable; the typical output of a 20,000-litre tanker would only be around 60,000 litres an hour.

Additionally, with a fully loaded 16,000-litre tanker and tractor weighing in at around 32 tonnes, compared to a tractor with reelers and dribble bar toping only 12 tonnes, soil compaction is reduced considerably. Also, there will be significantly less damage in gateways as the heavy loads move onto the paddock repeatedly during the day.

Lending itself to the application and compliance strategies being increasingly implemented, the optional SmartSpread Live system automatically records the amount of liquid spread and tractor forward speed. The rate of spread can be adjusted to suit target rates. The system also records spreading date and location, providing proof of placement to regulatory authorities.

Application via dribble bar places effluent directly on the ground rather than spraying in the air, thus reducing odour and wind drift, and ensuring more efficient uptake of nitrogen.

“Rather than effluent being a waste product, it becomes a valuable resource that offers measurable positive results on-farm, in improved pasture, nutrient-rich land for arable cropping and a major reduction in the amount of artificial fertiliser needing to be brought onto the farm.”