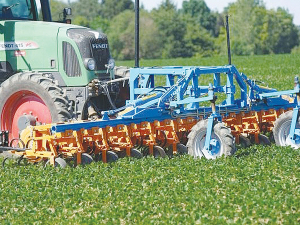 Amazone's system does not require the same row to be planted each year, rather each row is managed separately through the growing season.

While Controlled Traffic Farming (CTF) has become increasingly popular over the last decade, German company Amazone is looking to take things further, by placing an emphasis on individual rows.

CTF requires the tractor to move along pre-determined wheelings from planting and growing, before a harvester moves in and uses the same tracks. Throughout the season, any implements like cultivators, drills or sprayers also travel in the same 'roadways', operating at working widths or multiples of the desired settings.

In many cases, those wheelings are carried over for use in the following growing season. Amazone's system does not require the same row to be planted each year, rather each row is managed separately through the growing season.

Developed in collaboration with German manufacturer of specialised hoes and an agricultural services co-op, the former, Schmotzer Hacktechnik, was purchase by Amazone in 2019 in response to the need to reduce chemical inputs to achieve better environmental outcomes, and to the increasing cost of agrichemicals.

This latter consideration has become even more relevant with the arrival of Covid-19, production delays and burgeoning shipping costs.

Recently awarded an Agri-future Concept Award by the DLG (German Agricultural Society), the development sees a plant establishment system that considers each row to be a separate crop within the paddock. Crops are planted at a uniform 50cm spacing, with grain in double rows, including a 25cm offset for a positive crop rotation effect. The system is said to deliver optimal yield potential and maximum efficiency in the use of all inputs.

The technique also allows growers to plant a "companion crop" between the rows, said to offer benefits including reduced moisture evaporation and soil erosion. Amazone goes one step further by suggesting that the companion crop will eventually become an essential part of the process, by adding to the photosanitary support of the main crop as well as creating soil fertility and biodiversity.

In other Amazone news, the company that was formed in 1883 and employs 2,000 people over nine production sites announced a new sales record for its 2021 financial year, hitting a turnover of €655m, exceeding the previous year's result by 22%, that had already beaten 2019 by 15%.

Directors attributed the increase in sales to the continuous product developments of its extensive product range and rising demand for high performing machinery that can improve productivity and help reduce operating costs.

With many self-propelled forage harvester manufacturers offering machines hitting 1000hp, the bottleneck in any harvesting system is always likely to be at the clamp.