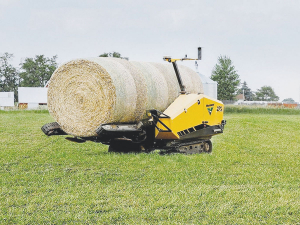 Bale production specialists Vermeer says its new autonomous bale collector, Bale Hawk will save time and labour by removing the manual task of collecting bales from the paddock.

We've got used to many forms of tech in agriculture, such as global positioning systems (GPS), auto steering and variable rate application of fertilisers and sprays. Now it looks like the mundane task of moving bales is about to see an upgrade.

Bale production specialists Vermeer has recently shown where they see the future heading, with a look at their autonomous bale collector, Bale Hawk, that is said to save time and labour by removing the manual task of collecting bales from the paddock.

The patent-pending system uses sensors to detect its position in the paddock, then plots the most effective route to collect up to three bales and transport them to a central location for wrapping or stacking.

Powered by a Deutz powerplant, rubber tracks are then used to move the machine, while similar tracks lift and transport the bales onto the machine. It is said to weigh less than three tonnes, and the manufacturer also suggests there are benefits of reduced compaction, both in terms of the machine’s footprint, but also in the optimal route the unit takes to collect bales. This is in comparison to the haphazard movements and repeated passes that traditional collection by front end loader or telehandler will typically make.