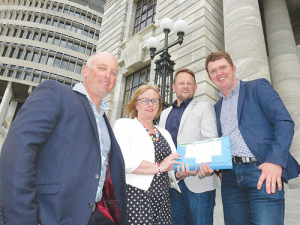 Migrant petitioners (from left) Chris Lewis, Barbara Kuriger, Ben De’Ath and Wayne Langford on the steps of Parliament with the petition.

A 7,500 signature petition was presented to parliament last week calling for changes to NZ’s immigration laws.

Some New Zealand dairy farmers go from one year to the next wondering who is going to milk their cows, says the head of Federated Farmers dairy section, Chris Lewis.

The problem, says De’Ath, who organised the petition, is that the present law on ‘low skilled’ workers requires these people to apply for a work visa every year, and if they work for three consecutive years they must return to their own country for one year before they may apply to come to NZ again.

“It makes no sense,” says De’Ath. “It’s only after a couple of years that people begin to understand pasture-based systems and set down roots in NZ. It’s completely illogical to send them home when they are starting to add value and become settled.”

He says they want a policy which recognises that in some regions there are specific skill shortages, and they want a 36-month visa system to give certainty to employers and employees. They not advocating for wholesale relaxation of immigration laws but a system that deals with specific regional problems.

Lewis says he employs two Filipino farm workers and is frustrated by the one-year automatic stand-down. In Waikato where he lives there is low unemployment and every young Kiwi who wants to work can get a job. In fact, it is hard to attract good young people to work on dairy farms because so many other job opportunities are available.

“If I knew there was certainty about employing [migrants] I would invest in their training and housing and getting their family here, making sure they had a settled life. But as it stands now I and they go from year to year wondering what will happen.”

He says every 12 months the workers must apply for a visa and 60 days may pass before they get an answer.

“If the answer is ‘no’ then I have to go and begin the exhaustive process all over again and at the same time wonder who I can get to the milk the cows because it is so hard to find good people.”

Lewis says the problem is bad in the South Island and is worsening in Waikato where he farms.

Follow the Government and go early with your on-farm decisions, says Sharon Morrell the head of DairyNZ’s consulting officers in upper North Island.