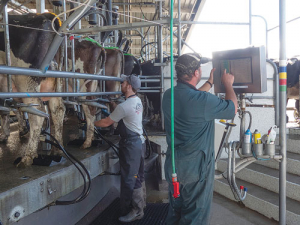 Genetics are used to breed lighter but high producing cows.

Michelle Pye, who owns and runs Pye Group with her husband Leighton, explained this whilst showing Dairy News around the Pye Group’s Grantlea Dairy No 1 farm, on the tourist route between Rangitata and Geraldine.

Partly in response to Mycoplasma bovis, and partly in an effort to use genetics to breed a lighter but still high-producing cow, they have moved this season to no-bull mating. Except for the heifers and two farms which still run herringbone sheds, all group farms have automatic drafting with heat detection cameras in the rotaries.

Pye says they are trying to reduce stocking rates without affecting milk production.

“The thing we’ve got to be careful of as owners, because these guys are on a contract, is that we don’t make a decision that cuts their income. We’re being a little cautious about it but it’s where we want to be heading.”

In previous years contract milker James Emmett has used Hereford bulls as a marker at the end of six weeks of AI, rearing up to 50 beef calves of his own. This season he is forgoing that in the interests of the all-AI breeding.

The previous contractors on the property, Joe and Suz Wyborn, were named Canterbury Supreme Winners of the Ballance Farm Environment Awards in 2016, thought to be the first time anyone has won the title on land not their own.

The farm takes water from the Rangitata South irrigation scheme and can store about 30 days worth in an onfarm irrigation pond (at 8.5ha the largest in the group by surface area).

The scheme itself has its own large ponds but cannot take water from the river except at times of high flow, and has not been able to take any water yet this season.