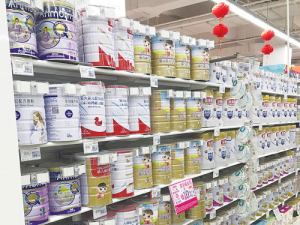 Fonterra’s infant formula deal with Beingmate in China is in tatters.

Fonterra has scope to lift its payout from current guidance, but its losses on Beingmate will likely weigh on its earnings and dividend payments, says New Zealand brokerage firm OMF Financial.

With dairy prices strengthening, OMF says milk price models show scope for Fonterra to lift its milk prices by 25c/kgMS from its current guidance of $6.40/kgMS.

This is unaffected by the GDT price index easing by 0.5% at last week’s auction, the first decline of the year.

“We see scope for Fonterra to raise their payout by NZ$0.25/kgMS for 2017-18, which would provide a buffer against the co-op’s likely losses and write-down associated with its investment in Beingmate,” OMF says in its monthly dairy report.

“Beingmate’s poor performance has a direct impact on Fonterra’s profitability: Fonterra’s share of Beingmate’s net loss was reported at $42 million in the full year 2017. We expect losses this year to weigh on Fonterra’s earnings and dividend payments.”

BNZ’s Doug Steel says the easing by 0.5% at last week’s GDT Event auction was close to expectations. “Prices remain 12.9% higher than at the start of the year and 3.5% up on a year ago. Wholemilk powder prices rose 0.3%, with an average price of US$3246/t.”

Steel says the result fits with the idea that the upward price influence from NZ’s adverse weather has run its course, although there may have been some reduction in demand due to the lunar new year. Only 152 bidders took part in this auction, the lowest number seen in the past year.

“There is upside [possibility] to our $6.30 view at current product price levels. Indeed, if current prices were to persist for the remainder of the season something above $6.40 looks possible. It all depends on where international prices track over the coming months and, critically, what effective exchange rate Fonterra has managed to achieve.”