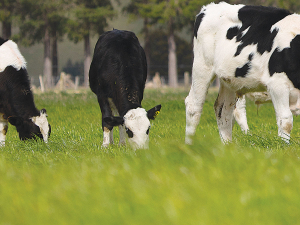 Alleva Animal Health claims it is a huge leap forward in terms of efficacy and safety in cattle drenches.

The team at Alleva Animal Health claim to have developed a world-first formula specifically designed for weaned calves.

The product, Turbo Initial, is an oral drench that the company says provides worm parasite coverage, as well as helping to protect against coccidiosis.

"We've listened to the market and worked with vets to iron out as many pain points of cattle drench options in New Zealand as we can," he says.

"The result is really exciting and a huge leap forward in terms of efficacy and safety in cattle drenches."

Turbo Initial is stage one of the 3-stage drench programme designed by Alleva Animal Health specifically for growing cattle.

Due to stress and undeveloped immunity during the weaning transition, calves are very susceptible to parasitism from both gastrointestinal parasites and coccidiosis. The result can have an impact on growth rates during this time while the calf's immunity to coccidia infection is developing.

Providing worm parasite coverage, as well as helping to protect against coccidiosis, is a combination that helps provide protection during the vulnerable period after calves come off coccidiostat-treated meal onto pasture while supporting the development of their natural immunity to coccidiosis.

The second product in the range is also an oral drench named Turbo Advance.

This targets cattle in that second stage of growth, where coccidiosis immunity has developed and they are still a safe size to drench orally.

It can also be used on cattle under 12kg which is often not an option with many other drench combinations, allowing for variations in growth rates within mobs. Turbo Pour-on and Injection are alternate treatments for the third stage of growth, suitable for cattle that are too large for an oral drench.

Turbo initial is available exclusively through veterinary practices nationwide and is recommended as the first drench for weaned young stock.

The couple milk 1,200 cows over two farms and rear approximately 320 heifers each year. Coccidiosis has been an issue for them in previous years and required a special treatment during weaning.

Initially they selectively dosed calves with a specific coccidiosis product due to the costs involved, but eventually began treating the whole lot to avoid problems - and they admit it's an expensive process.

"Once weaned, they are sent to graze about 35 minutes from the farm so we don't want to be driving over every five minutes to treat a couple, but it's very expensive to do them all," explains Matthew.

Last season, Vetlife Dunsandel suggested trying Trench Initial oral drench, which has been specifically designed for weaned calves by providing worm parasite coverage along with the added protection against coccidiosis.

The couple claim the oral drench worked really well and was a welcomed change from the separate treatment that they'd used previously.

"For us it's about shutting the gate before the horse has bolted," they say.

A combination pour-on that is rain resistant has been released by local company Alleva Animal Health.