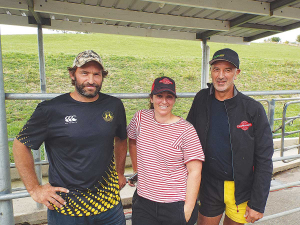 The chance of an extra set of eyes on a dairy farm is not to be sniffed at, so a recent on-farm show and tell day in the Waikato created a great deal of interest.

About 40 people turned up, not to see the latest employee but to hear about Bill and Kay Aubrey’s experience of using CowManager, a monitoring system that offers the ability to look at the fertility, health and nutrition of the herd 24/7.

The system, driven by patented ear sensor technology, measures three stages of activity, which is combined with data collected from measuring rumination, eating and animal temperature, which in turn uses clever algorithms to pinpoint areas of concern.

Claimed to be the most accurate system in the marketplace, CowManager developed and holds patents around collecting ear temperatures, using a clever dual temperature device that can detect swings of up to 7 degrees.

In practice, the ear sensor relays collected data to a series of routers placed around the farm, that in turn, wirelessly forward this information to the farm office, smart devices or to storage at a cloud- based domain. An overview sees four distinct areas of operation-fertility, health, nutrition and the recently introduced Find my Cow function.

Heat Alerts allows users to see the ideal window for artificial insemination, by indicating the state of the heat cycle, alongside an indication of the last heat event, while also proving to be very clever at detecting “silent heats”. Compatible with most automated drafting systems, animals can be seamlessly moved to a holding area post-milking, or in the case of the Aubrey’s, quickly identified and moved manually.

The system is said to be 98% accurate for heat detection, but can also monitor heat status after calving, identify irregular heat cycles, while also delivering 100% accuracy for in-calf diagnosis. In the Aubrey’s case, using the system saw empty rates reduced from 15% to 6%, with an added benefit of being able to “ignore” animals for culling, but also ensure the peak timing for cows to be inseminated with sexed semen.

On the health front, the system offers a traffic light approach to monitoring animals, with a yellow display meaning “keep an eye on this animal”- orange meaning the animal is sick and needs some intervention and a red alert showing the animal is very unwell. Typically, these alerts give early, often sub-clinical indications of conditions such as milk fever, laminitis and mastitis. During the monitoring process, individuals are compared against the herd average, while also sending alerts if there are extended periods of non-movement.

Interestingly, the Aubrey’s and farm manager Matt Kerr talked of the alerts indicating that something “wasn’t quite right” with several animals. Cows presented with heads thrown back, then apparent blindness, with affected animals typically dead within 24 hours.

The system identified suspicious activity compared to the rest of the herd, with an indication of both a temperature and rumination drop, that upon veterinary investigations indicated sulphate poisoning.

Indeed, speaking with the Aubrey’s post-event, Kay said, “without a doubt, the biggest standout for us is bang up to date information on our animals’ health status, both individually and as a herd. In the case of the sulphate poisoning, a sub-clinical alert allowed us to take early action and cows being saved with a $10 dose of Be Calm.”

On the nutritional front, the system was configured to suit all types of New Zealand dairy operations, proving to be particularly useful during the cow’s dry period, offering insights into eating and rumination, particularly in the risky weeks prior to calving. Using ear temperature measurement combined with behaviour could also warn of potential heat stress, while optimisation of feed and good management could prevent losses and lead to a generally healthier herd.