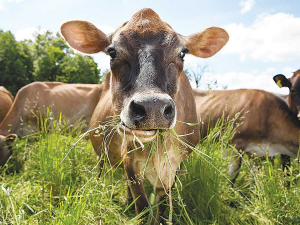 The co-operative spent $16 million on research and development during the 2019/20 season.

The discovery of genetic variations have been made from the farmer-owned co-operative's database of genotyped cows and bulls and validated through on-farm inspections.

LIC chief scientist Richard Spelman says that despite a relatively low frequently, the hidden impacts on production from these variants can be substantial.

Spelman says they are recessive genetic variations, which means an animal has to have two copies to be affected.

"Identifying these animals via Genemark and removing them from the herd as calves will save in lost production and the rearing cost for these animals.

"We estimate this could be worth up to $10 million in lost production each year across the national herd," he says.

"Even having a few of these cows in a herd could equate to significant loss in productivity and profitability."

He says that LIC's continued investment in gene discovery, with the Genemark testing platform, will allow farmers to identify genetic variations in animals as calves, remove them from the herd, and allow them to focus on the rest of their replacements.

Each of the variants exist within the national herd at differing frequencies and all have varying effects on an animal's production.

From spring 2021, all farmers using LIC's Genemark services will automotically be notified at no additional charge if any of their calves are affected by any of the variations.

"We are pleased our combined investment into science and technology has come together to deliver a simple and convenient service for farmers that is likely to save millions in lost production."

Herd improvement and agri-tech cooperative LIC has formed a distribution partnership with Israeli-based Afimilk to market its hi-tech cow collars in New Zealand.