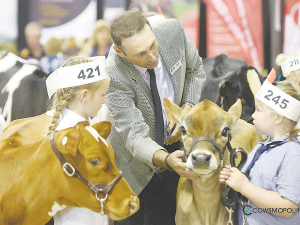 Dean Malcolm, Bluechip Marketing, is surprised by the interest among young people.

The energy building among the industry's young people in the lead-up to the autumn harvest sale has already proven to sale organisers that they did the right thing by instigating it.

Up to 60 live lots and embryos will sell in an evening sale run by Dean Malcolm, Bluechip Marketing and his team at the Cambridge Raceway on April 22. The Australian cowman/cattle photographer - who has settled in New Zealand - is a former co-owner of Australia's well-regarded Bluechip Genetics.

His decision to make New Zealand his home came at a time when marketing and cattle photography work - usually sourced by Kiwi breeders out of Australia - would have been shut down with Covid-19.

Bluechip Genetics was premier breeder at International Dairy Week in Australia nine out of ten years, during which time it led the way in sale marketing and averages - with prices peaking at A$101,000 for a three-month-old calf.

"There has been so much support [for the sale], that it's been energising at all levels," says Malcolm. "What's really struck me is the excitement among the young people who want to be there, and who want to be involved. it's great for New Zealand's future.

"We've deliberately planned for it to be held in the school holidays, and we have a lot of youth coming to help. I think the interest is coming because this is new, it's different, it's all the breeds, and it's catering for everyone interested in genetics, or making money from genetics."

He says it is no accident there is no high Breeding Worth (BW) cattle listed in the catalogue. Malcolm says BW is a New Zealand index which - unlike genomics - is not recognised internationally. It makes it a limited yardstick from his perspective.

"I'm not saying BW is wrong. It's just not our market. And, when we talk about type, we're talking about functional type, and that's what the world wants. We want a beautiful, functional dairy cow which will last for a long time.

"And, there is no shame in getting up and milking beautiful cows."

He says the focus for the autumn harvest sale has been on cow families, high profile international sires, and performance.

Time to get salesmen to sharpen pencils

There are many ways to acquire the new machinery you need to have working your land and herds.

FARM SALES WERE up 47.3% (133 farms) for the three months ending November 2013, compared to the same period in the previous year, says the Real Estate Institute of New Zealand (REINZ).