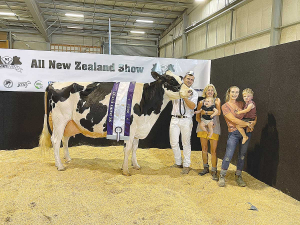 Cattle judges undergo rigorous training to ensure they can not only pick a good animal but that can also justify their reasonings behind it. Tom says that was the most challenging aspect of the competition.

“You have all these senior judges around the ring, and I have never been one for public speaking. I know in myself what I think is a good cow but articulating that can be difficult.”

The Bennett’s obviously know the winning formula for a good animal however, as their six year old cow won both the Supreme Holstein Friesian Championship and the All Breeds Senior In-Milk Reserve Champion.

“We weren’t even sure if she was going to make Dairy Event after she calved in April with a large set of twins that knocked her back a bit.”

Francesca was given Cleo’s dam, Tronnoco Talent Carla, as a 21st present by her mother Linda.

“Mum bought Carla at the Canterbury Collection sale, we showed her a bit, and she did really well,” says Fran.

Francesca wanted to breed from her and really liked the look of Semex’s Gillette Windbrook after winning a Holstein Friesian Scholarship to Canada and attending the Semex Walk of Fame where she was helping look after a Windbrook cow that she particularly liked.

“I managed to persuade mum to use him but after three years and three attempts Carla had only produced bull calves.”

“We decided the only way to get a heifer was to flush her, out of the six embryos she produced, we got one heifer, which was Cleo.”

Francesca says she wasn’t much as a calf but as she has developed, she’s become truly special.

“We took her to NZ Dairy Event as a two-year-old and got Reserve Intermediate Holstein Friesian Champion and Reserve Intermediate All Breeds Champion. She also won the national Semex on Farm final and photo competition that year. That’s when we thought we’re on to a real winner. That was incredible for us. She has just got better and better since then.”

On a farm just out of Te Awamutu, there is an immense rivalry going on. The purpose of the rivalry is to be identified as the best Holstein Friesian 2-year-old in a group of heifers that have been genomically identified as genetically superior.