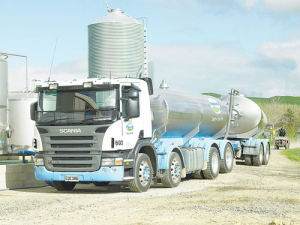 For the seven months to December 31 collection reached 914 million kgMS.

NIWA last week said many more ‘hotspots’ – with soil moisture deficits – were seen during the previous week in the North Island.

A large hotspot now encompasses all of Northland and northern Auckland. Another large hotspot covers much of northern Waikato and Coromandel Peninsula. Additional hotspots are in central Manawatu-Whanganui and a small part of Tararua District.

Across the South Island, soil moisture levels generally decreased in northern areas, although small improvements were seen in inland Otago and Southland.

A couple of new, small hotspots have begun to emerge in northern Hurunui District and inland South Canterbury.

Fonterra's New Zealand result contrasts with the cooperative’s milk collection in Australia for the six months to December 31, which was down 14% on the same period last season.

Nominations are open for a national award that recognises dairy farmers who farm sustainably.

The Fonterra Responsible Dairying Award, launched last year in the New Zealand Dairy Industry Awards, honours farmers respected by their peers and community. Entry is by nomination only.

The winner could be a supplier to any of NZ’s processors and come from any farm or farming partnership displaying performance and leadership in caring for people, animals, ecosystems and communities.

Rachel Baker, the awards executive chair, says farmers are encouraged to tell how they are farming responsibly -- environmentally and socially -- and to showcase excellence.

“Many of our winners and entrants from our Dairy Trainee, Dairy Manager and Share Farmer awards programmes do this and progress to leadership roles in the industry and their communities.