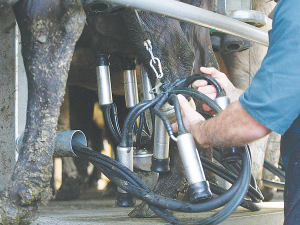 BNZ senior economist Doug Steel says there are risks on both the up and down sides - evidenced by Fonterra's wide $1.50 forecast range.

"While the 20c difference to Fonterra's range mid-point is meaningful in absolute terms, we wouldn't split hairs at this stage of the season.

"There is a long way to go. Anything around these levels would be positive."

However, Steel points out that there are palpable risks on both sides - evidenced by Fonterra's wide $1.50 forecast range.

There is the possibility that global dairy prices may hold up better than expected as high international grain prices lift costs for NZ's northern hemisphere competitors.

He points out that US corn prices have more than doubled over the past 12 months. Such things make an aggressive global milk supply response to current higher dairy prices less likely.

"Indeed, the current milk-price-to-feed ratio in the US suggests milk production growth there is more likely to slow into year's end rather than lift," says Steel.

Other positives stem from the possibility that world growth proves even stronger than expected, as the vaccine rollout allows more reopening.

"On our calculations, if product prices and the NZ dollar remain around current levels for the entire season ahead it would see milk prices test the top end of Fonterra's price range."

But there are downside risks too and much hinges on Chinese demand.

According to Steel, strong Chinese demand is not assured.

"And there is a chance that as inflation picks up globally, central banks start thinking some of it will be persistent, such that they change their tune and start talk more about removing monetary stimulus.

"That could quickly take the edge off what has been a very strong run up in commodity prices."

Steel says what matters most is what happens next - so all eyes back on coming Global Dairy Trade (GDT) auctions and the NZ dollar.

He says the small GDT price dip earlier this month is of little consequence for the season ahead.