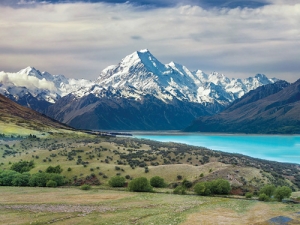 Mount Cook Station has been sold to a local couple who intend to farm it themselves.

Mount Cook Station has been sold to a local couple who intend to farm it themselves.

The 2600ha high country sheep station sits at the head of the Tasman Valley in the Mackenzie Country and is bordered by the Tasman River and Lake Pukaki.

All tourists heading to the Mount Cook village drive past the station.

Established by Scottish migrants Andrew and Catherine Burnett in 1864, the station stayed in the family for 151 years. Donald 'Mt Cook' Burnett ran the farm for 69 years till he died in 2010 aged 95.

Burnett was well regarded in farming circles as a sheep breeder and was the inaugural winner of the Merino World Challenge Trophy in 2000.

He set up one of New Zealand's first private hydro-electric power stations in 1953 and helped with the installation of the famous Mackenzie sheepdog statue by the Church of the Good Shepherd at Lake Tekapo.

After his death, his sister Catriona lived on the farm until she died last year aged 97. Neither Donald nor Catriona had children and the property was sold by the trustees of their estate.

The station's terrain varies from flat to steep hill country and varies in altitude 540-1000m.

Locals Alana and Clint Miles learned recently of their successful tender and will move their by April.

Alana grew up on a neighbouring station and Clint is a helicopter pilot at Tekapo.

Brown said the tender process went smoothly and with much due diligence. Properties like this one had rarely remained in one family for so long and Brown said he felt privileged to help the trustees with the sale.

There had been calls for the Government to buy the property to keep it in Kiwi hands.