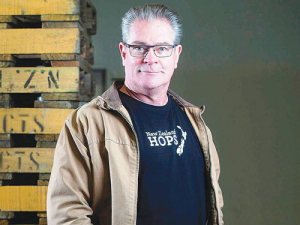 Chief executive Doug Donelan says the Tasman-based 27-member producer co-op has grown from about $8 million to about $35m gross revenue.

But he says the co-op believes growth needs to be managed to ensure the significant increases in volumes that are coming on stream can be marketed.

“There are others who believe we could triple the current volume. My view is that attempting that would be reckless,” Donelan told Rural News.

“Cycles exist in the international hop market and it’s easy to get caught on the wrong end.”

Donelan noted in an industry update earlier this year that mature craft beer markets like the US are showing market signals of slowing down.  However, overall the craft beer market domestically and internationally is quite buoyant with significant growth in emerging markets.

Donelan says there are now more hops in the ground than at any time previously. Most of the increase is quite recent – in only the last two or three years.

“But generally the volume has been quite static between 700 and 800 metric tonnes.”

He says craft beer has contributed much to industry growth as more hops are used in certain beer styles favoured by the craft segment consumer. Big brewers actually produce a large amount of craft beer these days.

“Our cooperative has a broad customer base which for the most part is high-value specialty hops for craft and higher value beer products.”

About 75% of the hops produced by NZ Hops is exported. All commercially grown hops in New Zealand are grown in the Tasman District, however there are trials underway in Central Otago and Hawkes Bay.

“Hops are latitude sensitive which means they require a specific day length to flower and mature, and they need cold winters and calm, sunny, stable growing conditions, low wind and good rainfall,” he says.

NZ Hops has a breeding programme and owns the plant rights.

“Two other promising selections will also be advanced next year into grower trials as NZ Hops Ltd continues to focus on creating a point of difference for its customers while keeping pace with the international brewing market.”

Waikato companies Power Farming and the Good George Brewing Company got together during Fieldays...