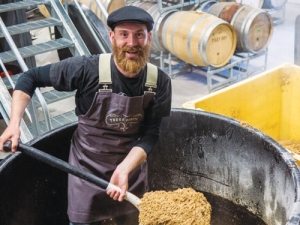 Brewing up a storm with the Kilarabbit beers – Jody Pagey.

But when it comes down to it, how many viticulturists enjoy a cold one after a hard day of toil, and what winemaker doesn't crave a pallet cleansing pilsner after a tasting?

With at least half a dozen beer-brewing operations of various sizes scattered throughout Central Otago vineyards, it's certainly worth considering the potential cross-over between beer and wine production and indeed, can the two disciplines actually compliment one another?

At Terra Sancta in Bannockburn, brewing beer means a lot more for head winemaker Jody Pagey, than merely producing a quaffable beverage to toast the vineyard crew. When owners Mark Weldon and Sarah Eliott established Terra Sancta four years ago they were keen to stretch the skill set of the their team.

"Mark came to me one day and said he was keen to engage me more deeply in the business, and setting up a very small scale beer operation was a good way to do that," says Pagey.

"What we did then was start at the ground up, looking at the cost of caps, labels, run size – all the same things that happen in the wine business. Mark and Sarah then asked me to lead this, model out the business, and then execute it – including the brewing of the beer to a specific set of requirements they had developed."

Just over the Hawksburn Road 25 kilometres away in Earnscleugh, Mike Wing has what he calls "his dream job". As vineyard manager at Two Paddocks since 2009, Wing talks fondly about his love of working with plants and soils, but also explains how he never fully exorcised the demons associated with a home-brewing hobby formed many years ago.

"When you're a young fella, everyone plays around with home-brew kits, but it never eventuated to much did it? But after travelling in Europe and tasting good beer, you come home and it's just not the same. Beer wasn't something that you just put in a funnel anymore".

After experimenting with kit brews before teaching himself all-grain brewing, Wing and his friend Scottie put together some brewing apparatus consisting of a pot, an esky with a false bottom, and a tea urn for the kettle.

"It was still a hobby that just got out of control. Eventually you accumulate so much beer, you can't drink it all. It was still only 25 litres at a time, but we were getting good feedback from mates, so we splashed out and brought a 50L system. It was great too as it was on rollers so in the winter we would roll it inside to ferment and then stick it outside to cool, we were actually brewing better beer in winter."

Pagey however had to up-skill his home brewing credentials significantly as the Terra Sancta plan was to get up and running with a commercially viable brew in decent quantities.

"After putting the plan together, we spent 12 months perfecting the recipe – it's not easy! There were many long nights sorting out how the equipment was going to work, formulating a recipe, marketing and compliance. Our recipe is a secret – but we make a fully organic Double IPA, with great bitterness, using local race water and entirely South Island ingredients. We also use some old Terra Sancta Pinot barrels to condition it before it is bottled. The name evokes the idea of a guy making beer in a shed on the Bannockburn goldfields 100 years ago. The name Kilarabbit has more than one meaning too. Is it to 'kill a rabbit' or is it a 'killer rabbit' and since we have released it people have actually said that at 7.2% alcohol it 'would' actually kill a rabbit."

Mike Wing figured that after a fair few recipe failures and some classic home-brew heroics, it was time to see if his Pale Ale was good enough to leave the shed. After successfully launching it at the 2012 Alexandra Blossom Festival where their five kegs sold out in a day, the production capabilities of his 50L set-up were sorely exposed. But as Wing was managing a vineyard and was only able to brew on weekends and after hours, he needed another solution. Fortunately Steve Nally at Invercargill Breweries came on board to brew his recipes under contract and 'Jabberwocky Pale Ale' was given the kick-start it needed.

"So now we had bottled product and kegs to be able to get into places. We were a little bit green about pricing and marketing, but I had seen some of this side of the business through working with wine. But the beer drinker is different to the wine drinker...it is hard to change some people's perceptions, especially if they have been drinking the same beer their whole lives. Some of the folk around here wouldn't even try a Steinlager."

With the challenge of securing taps in pubs that are pressured by the big breweries to stock only their products, Wing's wife Ruenell started making in-roads by marketing their Jabberwocky beer further afield. An increased demand for their product meant the couple now had to find a way to increase production if they were ever going to take their burgeoning business to the next level.

Rather than invest in a new brew system that is prohibitively expensive, it made financial sense to go out on a limb and buy Wanaka Beerworks, which came on the market in 2014. Retaining the Jabberwocky label alongside the Wanaka Beerworks brands, Wing now delegates the brewing to the two brewers who were already employed by the brewery. This also gives him time to experiment with new recipes for the range that presently sits at three Jabberwocky varieties and four bottled under the Wanaka beer works stable.

"I don't really run the business, Ruenell does that. I still stay focused on the wine as growing things is still my passion and since owning a brewery I have realised that even more. I'd love my own piece of land to be able to grow some grain and mill it ourselves and grow some hops too, though I draw the line at malting grain."

After nine successful batches of Kilarabbit, Pagey views brewing as simply another aspect of his weekly and monthly chores as a winemaker. Though, he is keen to stress, just making wine has never been his only job detail at Terra Sancta.

"My role is really varied. For instance I was working in the vineyard on Monday, I'll be brewing beer on Tuesday and Wednesday, bottling another batch of beer on Thursday and Friday and then I'll be back in the vineyard on the weekend and on call for frost fighting. For us, winemaking obviously comes first and then when we have some capacity and time, we can do some brewing.

The great thing about beer is having complete control over your ingredients but with wine you get one crack a year and it's all about what you get from the vineyard. So it feels strange to have the amount of control we have with beer, though in saying that the first few beers we made gave me many a sleepless night – it is definitely not easy and not for the faint hearted."