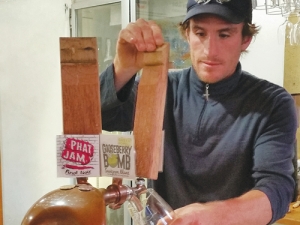 Not only is he the winemaker for his family estate – Allan Scott Wines, he is also the brewer behind the highly successful Moa Beers.

As we have seen from the previous story, winemakers just love to get their hands on some malt and hops, when not dealing with grapes. For Scott that love affair has seen him take brewing into a new realm for New Zealand, with his having achieved Certified Cicerone status, which is like being a Sommelier of beer. Scott is one of only 300 in the world and the only person in Australasia to hold such a title. Next year he will sit his Master Cicerone exam, and if he passes, will be one of only 12 people in the world with the title.

So where did this love of craft beer come from?

"I was working in California in 1998, for a company called Saintsbury. They had a philosophy that to make excellence you had to be surrounded by excellence. So everything we ate or drank was excellent. We always had amazing meals but it also went down to the beer we drank. We didn't drink Miller or Bud, it was Sierra Nevada Pale Ale. I remember trying it and going, 'holy mackerel this is awesome.' I had been used to drinking things like Speights and corporate beers. That was my epiphany moment."

A few more craft beers like that and he was hooked. The only problem though was when he returned to New Zealand he couldn't find any craft or hoppy style beers on the market. So in true Kiwi style, he decided if he wouldn't buy it, he would make it. Chatting with the owner of a local craft pub in Marlborough, Scott asked how he would go about brewing a hoppy beer.

"He told me to make it just like I would make Champagne. So I did. I made my beer using Champagne techniques for the first two and a half years. Every single beer was riddled and disgorged to get the carbonation in it. We didn't have any of the carbonation equipment or the beer crown seals or anything like that, so I used barrels and a lot of winemaking techniques. We were the first in the world to do a méthode traditionnelle beer and advertise it that way."
Moa Beer no longer practices those techniques, which has a lot to do with how the acceptance of craft beer has grown in the past 12 years, Scott says.

"Back in those days Kiwis didn't like cloudy beers, but that has changed. These days you can have the most cloudy, disgusting looking beer and people love it. So we can allow the lees to settle to the bottom now, whereas before we had to disgorge it. That was really labour intensive, as we had to do it all by hand."

While Marlborough might be the key player in the Sauvignon Blanc wine stakes, it is its neighbour Nelson that holds that position when it comes to hops. The region is becoming renowned for its dual purpose hops that Scott says provide both aromatics and bittering qualities. None more so than the new variety – Nelson Sauvin. You wouldn't be wrong in thinking that the name Sauvin has more than a little to do with our flagship wine variety.

"It is one of the most famous hops in the world at the moment. Named after Sauvignon Blanc, it gives you heaps of herbaceous and tropical characters and it smells just like Sauvignon Blanc. It is in short supply and is only grown in one place in the world – Motueka."

The irony of having a hop that resembles the wine Marlborough is famous for is not lost on Scott. It just reinforces to him that brewing and winemaking definitely go hand in hand.

But utilising hops with a wine sounding name is not the only link between the two beverages for Scott. Having come back into the winemaking position in the past year, he was determined that he wasn't going to focus on traditional styles of wine only. He wanted to have some fun, and the end result is some rather interesting new wine styles.

For the first time ever, Scott has combined grapes and hops to produce a wine that is like nothing else he has made.

"We have added the Nelson Sauvin (hop) to the Marlborough Sauvignon Blanc grape and that has been really successful."
So successful in fact that orders for the wine are already coming in from the US. Despite what you may think about adding hops to grapes, he says the final result still tastes like Sauvignon Blanc, albeit Sauvignon Blanc on steroids!

"The first trial we did, we put all the hops and the fruit in the press and pressed them out and added more hops to the fermentation vessel. What we ended up with was a very citrusy character. It is really pungent and in your face."

While with the Sauvignon it was standard yeast used for inoculation, when it came to a trial with Gewurztraminer, he decided to try a Belgian beer yeast.

"And that has come out awesome."

Flavouring Pinot Noir with chocolate and/or coffee is another trial he has undertaken, although the end results of those wines won't be truly known until next year.

Added to those he has also undertaken an experiment to determine how music during fermentation affects the final flavour components. And before you start sniggering, thinking Yeah Right, he has discovered it has had a considerable impact.

Again using Sauvignon Blanc, the juice was separated into three identical barrels. One remained as a control within the cellar, the other was played Pavarotti over and over again, while the third got up close and personal with Robby Fitch (Band Silent But Deadly, described as a crossover thrash metal band).

"The wines are all really different," Scott says. "Seriously they are. I was talking to a brewer, and apparently it has to do with the resonance that comes from the music, it creates frequencies that keep the yeast up in the solution, so they have a longer fermentation cycle."

All in all Scott says they have taken traditional winemaking and "flipped it on its head".

"So we are doing everything the craft brewers have been doing with beer and replicating that and doing it with wine."

He admits many will consider his trials as gimmicky, and a move from tradition, but Scott says they are an important way of re-engaging with the younger market.

"We won't bottle this wine, it will only be available on draft (specialized wine kegs) or in cans. Yes we are launching cans this summer. We think it will get people excited, and then when they see the traditional Allan Scott Wines, they will recognise us for doing some cool stuff."

Bubbles on land, sea and air

Just what impact does atmospheric pressure have on the aging of sparkling wine? If you had the same wine placed under water, a control in the cellar and another at altitude and left the bottles there for a length of time – would they end up tasting different?

These are two questions Josh Scott is keen to get answers to. So much so that he has taken 600 bottles of Allan Scott Wines Cecelia, a méthode traditionnelle, placed 200 at the bottom of the sea, left 200 as a control in the cellar and another 200 are aging at altitude.

All three batches will be left for at least two years and maybe three in their trial "environment" before the wines are tasted and analysed.

The motivation for this trial came about after 14 cases of 170-year-old Champagne were discovered at the bottom of the Baltic Sea back in 2010. While only 79 of those wines were drinkable, the condition and taste amazed experts. "(They) pronounced that it had an excellent taste and had even kept some of its fizz," reports stated.

It is probably not unexpected given the wines were stored on their side, at a constant temperature of between 2 and 4 degree C, in total darkness and at high pressure.

So if 170-year-old wines can taste all right, could more recent vintages benefit from similar conditions? Scott can't wait to find out.

"We wanted to see what the pressure and the cool temperature does to the wine and then vice versa, what happens at altitude."

In terms of the seawater trials, the bottles were placed in stainless steel cages and have been hidden quite deep in salt water.

"The temperature they will be at is around 5 degrees C, so it's a lot colder than in the cellar where the temperature would normally be between 9 and 11 degrees."

As for the 200 being aged at altitude, Scott says they have also placed them in covered cages at 1200 feet.

"They have all been through primary (fermentation) we got them through that first as we didn't want them to get down or up there and be stuck.

"It will be interesting to see how it works."

Long term he says it will provide a point of difference when doing tastings of their méthode traditionnelle.

"When you go into a tasting and you only have one bottle, it can be a bit boring. But we will have three, a control, one from the sea and one from altitude. It gives us a lot more to talk about."