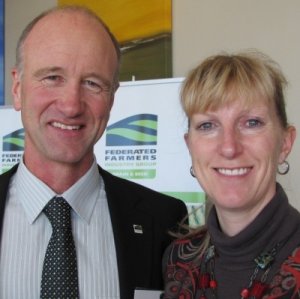 Federated Farmers National Conference hits Auckland from Wednesday with a packed programme covering the A to Z of New Zealand pastoral agriculture.

"Federated Farmers is excited to return to New Zealand's largest city," says Federated Farmers Bruce Wills, who has himself, just returned from the World Farmers Organisation General Assembly in Rome.

"The conference will give me a chance to share my experience meeting global agricultural leaders. Our chief executive, Conor English, will no doubt share what he picked up for New Zealand farming from the Rio+20 Earth Summit.


"We have an emphasis in our conference agenda of unlocking potential from dairy, meat and wool.

"Our dairy members will hear from a global expert on cooperatives and this is timely, considering Fonterra's Trading Among Farmers vote will conclude today (Monday, 25 June).

"In a radical development for 2012, we are holding three interactive couch sessions which will energise both audience and panellists. The topics being covered in these sessions are local government, the environment and foreign ownership. These will be moderated by Country99TV's Genevieve Westcott.

"It would not be a Federated Farmers conference without politicians, so we will be getting briefings from the Minister of Finance, Bill English, and our industry's minister, David Carter, Minister for Primary Industries.

"We are also looking forward to hearing from Opposition Leader, David Shearer, who of course enjoys a pretty good surname from a farmer's point of view.

"One of our highlights takes place on Thursday, 28 June, with the Vodafone National Awards dinner. Kicking off with the Beef+Lamb NZ cocktails, we will be announcing 2012's Allflex Agribusiness Person of the Year and the Ravensdown Agri Personality for 2012.

"Central to this great evening is the Vodafone Creme of the Crop Awards, where we assemble almost all of agriculture's major award winners for the past 12-months. It is a huge undertaking but central to us celebrating agriculture's continued success," Wills says.