Fonterra claims No.1 spot in China 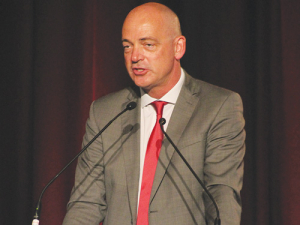 Fonterra is number-one in China in business and in reputation, claims Fonterra chief executive Theo Spierings.

“We have just gone to the number-one position in China when we measure our reputation,” he says.

Fonterra’s market share is 11% -- 5 billion L sales in a market consuming 45b L of milk per year.

“When I [refer to] share in litres of milk sold in China by our ingredients, consumer and food service business, we are by far number-one,” Spierings said at the release of the annual results last week.

“All the milk comes from New Zealand so that is massive value creation for our farmers.”

Spierings says Fonterra is building its partnership with Beingmate, the co-op’s first priority because China is its top market.

“You need to have a local partnership in China to be in the game. That is the strategic rationale.”

Spierings believes investing in a listed company in China will give Fonterra a dividend. But most important for the company is the global supply agreement with Beingmate and the necessarily huge volume of NZ milk. They also have the Darnum joint venture in Australia for which the co-op just got approval from the Chinese authorities.

Beingmate is a “massive partnership” which is tapping into Fonterra’s entire strategy and its milk hub strategy, Spierings says.

Chairman John Wilson says China inventories and demand growth are back to normal levels. The co-op’s business in China is an integrated strategy with many facets and on balance the business is performing well there, he says.

“The China farms business has been through a significant period of growth with the two main farming hubs completed and operating well.”

However, the Chinese business has been hit by very low global dairy prices, as have NZ farmers.

Wilson says now that milk has reached critical mass, Fonterra is confident it will integrate into the Chinese consumer and food service business.