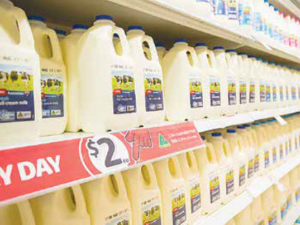 Australian supermarket giant Coles is directly buying milk from farmers at a higher price than offered by processors like Fonterra.

Australian media reports say Coles will pay farmers a full season price of about A$7.19/kgMS, which puts them ahead of most processors, including Fonterra.

Fonterra, which collects and processes milk in Victoria and Tasmania, recently came out with an opening price of A$6.55/kgMS.

In Australia, milk supply agreements for the new season must be signed before June 30.

A Fonterra spokesperson told Dairy News that while it couldn't comment on what Coles is doing, in terms of its own milk supply, it has come out early with an opening price.

"Coming out early with an opening price for the new season means out team has been able to get a head start and are out talking to farmers and getting agreements signed ahead of the 30 June deadline.

"The response from our farmers on our price announcement has been really positive; they appreciate the early signal which helps them plan for the season ahead."

Fonterra has been facing strong competition in Australia from other processors like Saputo. In its latest Global Dairy Update, Fonterra says its season-to-date collection to April 2021 is down 1.1% compared to last year.

Farmers seeking a better milk price have been dropping processors and signing directly with Coles.

Coles launched its direct-sourcing model in Victoria and New South Wales in 2019. The model was extended to South Australia and Western Australia in 2020.

Under the model, Coles offers a farmgate price to farmers, and pays dairy processors to process and bottle the milk. Under a processing agreement, Bega Dairy & Drinks will process and bottle milk sourced from Tasmanian farmers at their plant in Hobart to produce Coles Brand fresh white milk. It is now recruiting farmers to supply milk for Coles branded cheese.

By sourcing directly for Coles Brand Cheese it expects to lift this number to around 100 Australian farms across the country supplying around 400 million litres of milk every year.

Dairy farmer Peter Delahunty from Alvie in Western Victoria said that his three-year supply contract with Coles, signed in July 2020, was a game-changer for his dairy farm.

"Having direct access to the Coles Dairy Team was important to my business as it gives true meaning to 'working as a team'," he says.

"The financial certainty of a three-year price and the day-to-day support of my farm has been the best I have experienced in my 46-year farming career."

Charlotte Rhodes, Coles general manager for dairy, says the success of direct sourcing for Coles Brand milk and positive feedback from dairy farmers had prompted the expansion of the model to Coles Brand Australian cheese.

"Every time we have been to market looking to buy milk directly from farmers the response has been very positive, and we really value the relationships we have been able to build with our dairy farmer suppliers," she said.

"Extending our direct-sourcing model is part of our commitment to investing in a sustainable future for the Australian dairy sector, and our farmers have told us that it has made a real difference for their businesses."

Fonterra farmers are in line to be paid a milk price over $9/kgMS for the first time ever.

Before Covid, the Fonterra team in Singapore was always thrilled when Kiwi farmers dropped into the office during their travels and shared stories of life back on the farm.

Fonterra has dropped its 2021-22 New Zealand forecast milk collection by 1.6% due to weather constraints.