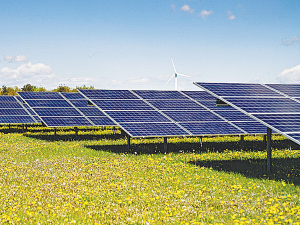 Arla Foods will be using solar energy to meet one-third of its electricity consumption within two years.

European dairy giant Arla Foods will be using solar energy to meet one-third of its electricity consumption within two years.

The co-operative has inked a deal with renewable energy company Better Energy for the establishment of four new solar parks in Denmark.

Under the 10-year agreement, the dairy cooperative commits to purchase the majority of the electricity from the new solar parks.

This constitutes the largest supply agreement in Danish history on renewable energy without public funding.

The parks have an expected capacity of 250 GWh, corresponding to the annual energu consumption of 156,000 average Danish citizens, and enough to cover about one third of Arla Foods' electricity consumption in Denmark.

Arla is increasing its target for reducing emissions in operations and logistics from 30 to 63 per cent: the solar park deal is one of several initiatives to help Arla meet its new 2030 emissions reduction target for its internal value chains.

Hanne Søndergaard, executive vice president at Arla Foods, says it is proud to be one of the first farmer-owned dairy cooperatives in the world to have a 1.5°C target.

"The new solar parks will play an important role in our shift towards renewable electricity and low-energy solutions at Arla Foods," says Søndergaard.

"Our Danish sites from a major part of our operations, which is why we are very pleased to begin our transition towards green electricity in Denmark."

By the end of 2025, Arla Foods' electricity consumption in EU will come from renewable energy sources, with the majority through green power purchase agreements and investments in solar and wind projects. With this new collaboration, Arla says it is taking a major step towards self-sufficiency in green electricity.

"Arla and our farmer owners continuously invest in new initiatives all the way from cow to grocery store with the aim of reducing our emissions and energy consumption. These initiatives include climate checks on the farms, reduction of food waste, sustainable packaging and green energy sources," says Søndergaard.

"The agreement with Better Energy is an important step in the right direction, and a way for Arla to contribute to the overal increase in Denmark's green energy production."

By the end of 2025, Arla Foods' electricity consumption in EU will come from renewable energy sources, with the majority through green power purchase agreements and investments in solar and wind projects.

The argeement is a major step for Arla towards achieving its target of having electricity consumption in Europe that is entirely reliant on renewable energy sources by the end of 2025.

European dairy co-operative Arla Foods is building a state-of-the-art commercial dairy farm in Northern Nigeria and use it as a training base for 1,000 local dairy farmers.

One of Europe's largest dairy co-operatives, Arla Foods claims that it's farmers are among the most climate efficient dairy in the world.