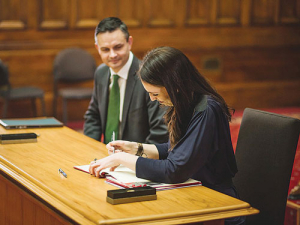 In past elections much of the talk on the campaign trail has remained there then has quickly been cut from the agenda as the books are opened and reality has dawned.

In essence there will be change, but how much is another matter.

A quick read of Labour’s website tells much about what will happen. Country of origin labelling is likely in, as is the splitting off of biosecurity and possibly the food safety functions of MPI. But with the coalition agreement signalling the establishment of a new forestry service, it’s possible these functions could remain under the MPI umbrella but with greater independence and more funding.

A review of the PGP grants is likely and Crown funding for irrigation is gone, though this seems to be based on the assumption that irrigation means dairy. It’s possible this may be revised in time to cover just horticulture, especially in the light of the Greens wanting dairying scaled down and a move to other forms of farming of which horticulture is the obvious choice.

There will be a strong focus on cleaning up rivers and this is likely to be based on a new national policy statement (NPS). Expect to see plans to improve rivers to swimmable standards fast-tracked and the fencing of intensively stocked land near waterways with setbacks for riparian planting to filter and absorb silt and nutrients.

The Greens have cows in their sights and they will push to reduce the size of the dairy herd, but Jacinda Ardern is on record as saying Labour would not try to reduce dairy herd numbers but would look at restricting large scale intensification of dairy farming.

The Greens will come unstuck when they try to impose a levy on nitrate pollution from dairy farms. Fed Farmers’ Andrew Hoggard has already labelled the idea “unfair, full of holes and likely to cost the environment”. Clearly the Greens have a thing about cows and are even talking about paying farmers to move away from dairying. Some are doing that; conversions to kiwifruit and avocados are gaining momentum. Not so conversions to growing hemp (sorry James).

Thanks to Winston the infamous water tax is gone and whether agriculture gets included in any emissions trading scheme will now be in the hands of a climate change commission. There will be a strong emphasis on regional development which will certainly benefit the agri sector and lifting the minimum wage to $20 an hour by 2020 will have some impact on farmers especially on their employing extra staff.

This old mutt would like to know how the sanctimonious Green Party and its MPs can continue to lecture everyone about the evils of climate change and how we all have to act now to save the world?