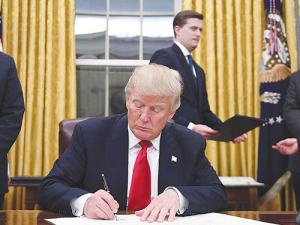 Donald Trump has completed a turbulent 100 days in the White House.

Plenty's been said about the first 100 days of the Trump presidency – more about unfulfilled campaign promises than tangible action – but in recent weeks the dairy industry has been drawn into some of the posturing.

While Trump’s promise to tear up NAFTA (a 23-year-old free trade deal with Canada and Mexico) and send home many illegal migrant farm workers have the US dairy industry deeply concerned, the recent dramas stem from other issues.

Canada has retained strongly protectionist policies to support its dairy farmers: it hangs onto a supply management system created in the 1970s that regulates farmgate milk prices based on different end-use categories, and controls access to the higher-value parts of that pricing structure via quotas for individual farmers. This sounds familiar: NSW and Queensland ran something similar prior to deregulation of farmgate arrangements in 2000.

The Canadian supply management system is one of the world’s most reviewed and ridiculed pieces of farmgate regulation, and has faced mounting internal and external pressure, including persistent trade complaints from the US, EU, Australia and New Zealand. The WTO has ruled that the high prices paid to Canadian farmers are subsidies that would help make exporting easier.

Canada also maintains a high tariff wall on most dairy products, which keeps out most imports from the US (and others), helping to prop up higher domestic milk and cheese prices. Exceptions to these are ultra-filtered milk and other protein-rich dairy ingredients used in cheese and yogurt, which enter Canada duty-free and hence land at a much lower cost to manufacturers.

In recent years, US dairies have expanded exports of these low-cost products to plants. In 2016 the Canadian industry (well… farmers) convinced the government to close the loophole in dairy tariffs with a new lower-priced class of milk as an incentive to get dairies to produce these protein ingredients using Canadian milk. That door shut. US imports of these products have crashed.

With the slowdown in access to this market, some US processors have recently found they had too much milk, and blamed Canada for the need to cut contracts to about 75 farmers, who have since been rescued by a host of other companies. The brewing political furore drew in Trump, a profound protectionist who complained of Canada being far too protectionist! Pot kettle black. In truth (if there is such a concept for Trump) he probably got involved to shore up support in dairy-rich Wisconsin where his support base held a marginal win over Democrats in the 2016 election. The milk volumes involved in this fracas are small. The milk effect of US exports of protein products in the past year is estimated at 220 million litres, or 0.23% of US milk output -- less than a day’s production.

Trump has threatened to tear up NAFTA to sort out these and a host of problems, and address a growing overall trade deficit between the two countries. That would have spelt a major disruption for the US dairy industry: about a quarter of national SMP output is trucked into Mexico, and it is the country’s biggest cheese export market.

He was forced to back down from that threat in late April after a chorus of business and industry leaders – and others in his party – pleaded for a rethink.

In fact both US and Canadian dairy industries have a glut of milk at a time when the world market has an increasing oversupply and weak demand, and have each cried to their governments to solve the problem.

It seems a strange situation in the US, as steady growth in milk output has long been a feature of the industry, yet there is a barrier to investment in new cheese plants. Cheese production has grown faster than total milk output in the past 15 years. Quite a contrast from New Zealand where new plants are installed ahead of milk supply, but the economics in manufacturing are quite different. That’s another story.

• Steve Spencer is a director of Freshagenda, an Australian food consultancy in Victoria.