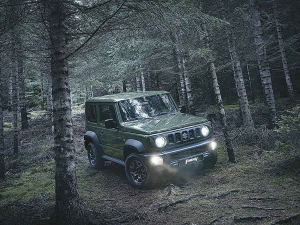 Declared the 2019 World Urban Car in New York, named one of the top three finalists in the World Car Design of the Year and named winner of a British game-changer award last year, the diminutive four-wheel-drive Jimny appears to be one of a few cars that has no peers.

Independent critics rated the 3.48-metre long Suzuki as fun, innovative and “a fantastic piece of practical design in an era of big and heavy SUVs.

At the heart of the car is a 1.5 litre, 16-valve engine, while the model is available with either a four-stage automatic transmission or five speed manual gearbox.

“There has been no reduction in buyer enthusiasm since the fourth generation Jimny arrived on our shores a year ago, despite an order bank and customers having to wait,” said  Gary Collins, general manager of automobile marketing for Suzuki New Zealand.

“The volume of sales is purely a reflection of our allocation and we could clearly have registered more sales had we been able to secure extra units,” said Collins

The Anderson family has found success with Suzuki, with a fleet of four DR 200SE Trojans and a LT 300 quad.