Your farm as viewed from space every week 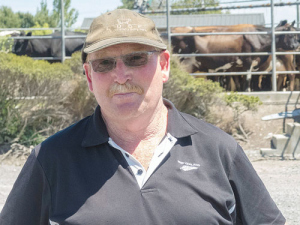 LIC says it can save farmers several hours a week by replacing the current practices of either walking the farm or towing instruments behind a vehicle.

Chief executive Wayne McNee says the project is part of LIC’s intention of developing products and services that improve productivity and decisionmaking for farmers.

“The SPACE service provides a game-changing opportunity for farmers to gain an objective assessment of pasture cover which will result in more informed decisionmaking on grazing, fertiliser and overall feed management.

“Satellites that pass over daily give us the best chance to provide our farmers a clear image once a week, which is aligned to best practice for pasture measurement,” said McNee.

Whenever a clear image is taken of a client farm, a detailed pasture report is sent out within 24 hours. LIC says it offers an objective assessment of pasture cover, not subject to any human bias.

The report creates a feed wedge, ranking paddocks by pasture availability, and includes an image of the farm showing pasture variation by colour and estimated pasture cover for each paddock.

Ron Pellow, executive director of the South Island Dairying Development Centre, whose Lincoln University Dairy Farm was an early triallist, says the real opportunity is for farmers to know and respond promptly to changes in pasture supply.

“We know there’s a 25% difference in milk production between the best farmers and the average, and most of that is due to pasture management. SPACE will provide consistent, frequent data that can help significantly lift milk production from pasture. It could be phenomenal for New Zealand.

“The technology will also help reduce our environmental footprint, as farmers will manage pasture better and so maintain production with less need for imported feed.”

Pellow said the reports sent to the farm include photos showing the colour variations of different pasture levels, plus figures for the likely yield of individual paddocks as calculated by LIC’s “smart algorithms”.

LUDF was helping LIC calibrate the system by comparing their analysis with LUDF’s weekly pasture walk.

“Over time we’ve seen those two images get much closer, and that’s given us confidence that they’ve got some technology that’s got a role to play in NZ agriculture,” he said.

The LUDF farm manager, Peter Hancox, also saw potential in the system. As long as it gave consistency, farmers could have faith in it and it was “definitely improving, he said.

LUDF had not yet made the switch from its weekly farm walk – as a demonstration farm LUDF has a standing invitation for interested people to join the walk every Tuesday at 9am – but Pellow said he can see a future where SPACE makes it unnecessary to walk the whole farm.

“We may go and look at three or four paddocks identified by the SPACE data and discuss whether we think the number SPACE is giving us corresponds with the number we believe the cows are telling us,” he said.

LUDF was involved when Australia’s CSIRO trialled a similar system 10 years ago. NZ discontinued its involvement at the end of that trial because the satellite went over only about once a week, and too many cloudy days made the chance of getting an image on a regular basis too low.

But so many more satellites are now available that there is a much greater likelihood of consistent data, said Pellow.

“If you end up getting one three times a week – fantastic. That’s probably more than you need. If you get it twice a week that’s probably ideal – probably much more frequent than many farmers would assess pasture,” he said.

The service is being launched in sections across the country, with six-week free trials being offered wherever a new area is added. Almost all of Canterbury is now covered, from Amberley to Oamaru.

Subscriptions are priced in steps based on farm size, all but the largest farms coming in between $2000 and $3000/year.

McNee is not giving precise numbers but said LIC is pleased with the response so far.

“Almost half of farmers located in the first areas have signed up. They have been quick to jump into it and their feedback shows they are impressed with the accuracy and time-saving benefits,” he said.

“We’re excited to continue with our regional analysis to take it to more areas around the country,” McNee says.