Good silage will serve you well 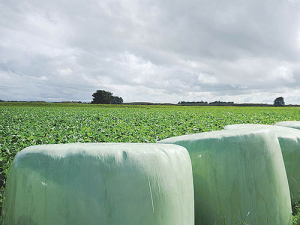 The process of making silage (ensiling) is very old.

It is basically a form of pickling something to preserve it.  It was used by the Greeks and Romans and became popular on farms in the late 19th century.  But you needed a pit or silo, and a lot of labour to feed it out, which meant it was not popular on small farms.

The invention of the baler and plastic wrapping now enable small farmers to take advantage of the benefits of silage as a supplementary feed for stock.

There are several good things about silage: you don’t need a hay barn; the wrapped bales or long sausage bags can stand in the paddock. And you can leave the bales where they are going to be fed; the end-product is near the original pasture.

You should only lose about 20% of the nutrients in the silage making process. The high-protein green leaf is maintained. It is very cost-effective conservation and now that it’s baled you can buy and sell it.

However, there is also a downside to silage.

It smells, and some people (and their neighbours) don’t appreciate this; ensure a good fermentation when making.

You can lose up to 30% of the original nutrients if the silage is made poorly, and holes in the plastic (even pinholes) can let in air and allow moulds to ruin large quantities.

In a good silage making process you ensile a good quality crop at the right stage.

When it is baled or put in a pit a bacterial fermentation starts. This should be in anaerobic conditions, i.e. no air. Ensure pit silage is consolidated by rolling all the time the pit is being filled. With wrapped bales this is less a concern as baling consolidates the grass and it is sealed immediately after baling.

This allows lactobacilli and streptococci present on the plant leaves to feed off the 3.0-3.5% sugars present; these are the good bacteria that we want. The silage smells sweet and like vinegar (lactic acid). These bacteria produce lactic acid which pickles the crop and prevents undesirable bacteria growing by causing a rapid rise in acidity (pH).

However, things can also go wrong in the silage making process.

If there has been no consolidation you get an aerobic fermentation (air gets in). The bacteria form a butyric acid fermentation which stinks; you will smell ammonia and see moulds.

After a while in the stack or bale it will look more like tobacco and is of very little feed value. In fact the stock probably won’t eat it. The protein has been cooked like a boiled egg and is useless.

The bales will shrink to half their original size – a sure sign of trouble.

- Cut when dry on a sunny day, not in the rain

- It will also increase dry matter and improve feed value

- Exclude air rapidly from the pit, and seal the pit rapidly

- Maintain the pit temperature below 30 deg. C by rolling to stop the plants respiring and using up their food stores.  Use a pinch bar to make a hole and drop a thermometer (on a string) down the hole to check temperature

- You can add inoculants to encourage the right sort of bacteria fermentation, but in most cases in New Zealand they are not essential with grass silage.  Discuss this with your silage contractor.

A new mower from Irish manufacturer Malone will be of interest as a no-nonsense, heavy duty machine for use in hay or silage production.