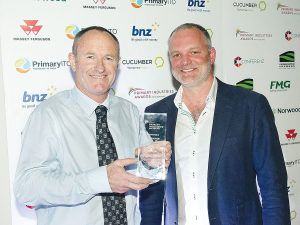 The company’s sales and marketing manager, Mark Brown, applauded the recognition of the collaboration in developing Ecotain, a forage herb able to reduce nitrogen leaching on livestock farms by up to 89%.

Agricom says its discovered specific lines of plantain (a common roadside weed) which reduced nitrogen leaching from the urine patch of cattle.

After ten years of R&D, with funding from Callaghan Innovation, the company set up the Greener Pastures Project, joining its expertise to that of Massey and Lincoln universities and NZ Plant & Food Research to support the results scientifically.

“We acknowledge Plant & Food Research and Massey and Lincoln universities,” said Brown. “NZ has at least 6.5 million dairy cows, so managing nitrogen leaching and the flow-on effect on waterways is a big challenge.”

Ecotain enables farmers to reduce nitrogen leaching while maintaining productivity, he said. “It allows them to simply make a change to the composition of their pastures.”

The plant can be used in a pasture as a special purpose crop with clover, or in a grass/ clover/Ecotain mixed pasture system. It can also be oversown into existing pasture.

Including 20% to 30% Ecotain in a pasture can reduce nitrogen leaching by up to 74%, Agricom says. Pastures containing 42% Ecotain are said to have shown leaching reductions of 89%.

Federated Farmers has released the finalists for the Primary Industries Awards, to be presented in Wellington on July 1.

The plantain product Ecotain has been shown to reduce nitrate leaching from urine patches in dairy pastures by up to 90%, says Agricom product development specialist Allister Moorhead.

LET FODDER beet grow out rather than raid it for a summer feed if at all possible, says Agricom’s Northland North Island sales manager Ben Trotter.